Last week Attila hit the road with Crown The Empire, Like Moths To Flames, and Sworn In for the Monster Energy Outbreak Tour. Directly prior to their departure, frontman Chris Fronzak (aka Fronz) posted a photo of the band's new tour bus below. It's a nice looking bus and upon closer inspection, it appears that it even says "Suck My Fuck," Mr. Fronzak's trademark phrase, on the side.


Just in case there were any subtle Photoshop shenanigans involved, we asked Fronz to take a closer photograph of the bus and send it our way. He kindly obliged, and you can see the images below.

We suspect that there will be some awkward moments on the highway during the next few weeks as perceptive children look out their minivan windows and ask mommy what "suck my fuck" means.

According to Fronzak, his tour bus driver said that they might get pulled over for its inclusion on the bus. We'll see what happens. Love them or hate them, Attila always makes things interesting. 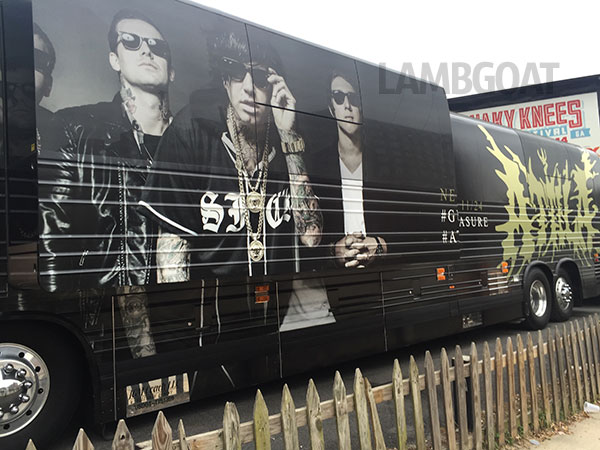 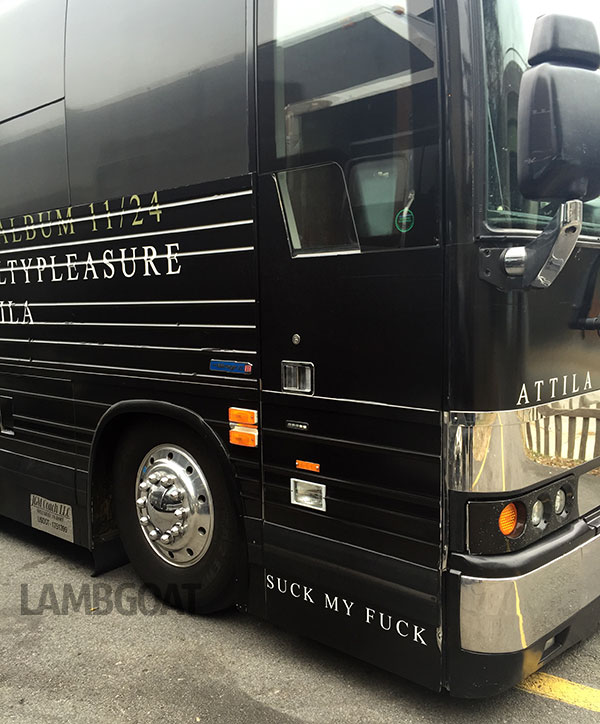 Atilla the Hun is not impressed.

Please for the love of god bus flip.

XTRMST should be on this.

Oh how edgy! I love how they defy authorities, like parents on the highway!

Fck this band and everything that they do

Does anyone over the age of 16 think this is cool?

I think the real surprise here is that Attila have upgraded from a van.

Why would you want people to know you are on a bus? I feel like people would be knocking at all hours and bothering you.

I dont use the word "dorks" often, but those guys are fckin dorks. I think its a fitting description.

Please come play in STL. I will rob you and burn your shit bus to the ground.

remember when he was on MTV's Made

Not trying to sound like the old hardcore kid but but this band and the new generation of "hardcore kids" need to kill themselves .. Ugh gay

why doesnt the gay on the vneck have hand tattoos? get with it bruh.

What a bunch of ding dongs. I hope someone spray paints goofy facial hair on their pictures. And what the fck is a "hardcore" band touring in a fancy bus for.

Can't imagine the raw hate all the bands who got robbed this year have when they see that tour bus. Unfathomable and unforgivable idiocy.

At least the roadies wont have to explain what the groupies will do on the bus, they'll just point at the door. Fronz is a genius

Emmure should be in this

How did these dorks afford a tour bus? don't they spend all their money on blow and teenage prostitutes ("fans")?

Meh, smart "soccer moms" wouldn't make it into anything special. I'd tell my kiddos the truth. There are plenty of people in this world who will be as crude/nasty as possible in order to get attention. In general, those types are not worth your time and are worthless when it comes to bringing anything positive into anyone's life. Shrug. Now onto more interesting things that matter.

Real easy to talk shit from the couch. Haha gays

yeah, take emmure, get in and flip your fck away

Kiss my shit. Now all I need is a tour bus filled with

Kiss my shit. Now all I need is a tour bus filled with aids

How much does it REALLY cost to book your favorite band for a show?
watch what happens when trash cans enter a mosh pit
true stories? Or urban legends?
Tyler, The Creator calls Bring Me The Horizon's Oliver Sykes a "Tumblr F*g F*ck"
Motorhead frontman Lemmy worth less than $650,000 at the time of his death