This week at a gig in Sydney, Australia, a fan ran onstage and put his arm around NOFX frontman "Fat" Mike Burkett mid-song. Fat Mike immediately elbowed the fan, knocking him to the ground, at which point Fat Mike kicked him in the face. Security quicky removed the fan from the stage. Here's the video:

According to Restless Press, Fat Mike had been complaining about neck pain during the set, which likely led to his aggressive reaction. To his credit, he did apologize to the fan, Alex, via Twitter: 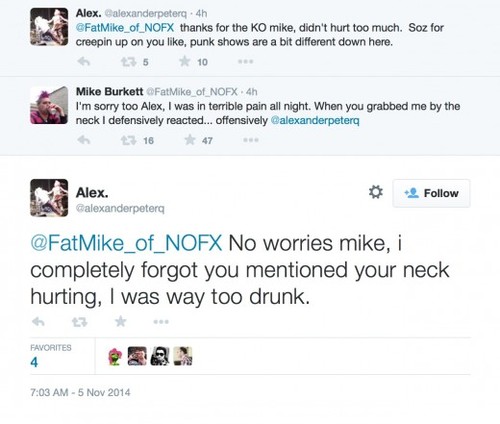 stupid fck, stop touring if you're gonna be like this

Mike did the right thing, he didn't consent for some douchebag kid trying to be cool to come up and grab him like that. This kid was being disrespectful. People need to stop bitching and moaning about shit like this. Entitled fcks.

Lol how are people complaining about Fat Mike and saying punk is dead? I think the way Fat Mike reacted was appropriate and pretty punk. Haha. Fat Mike has done way worse than this shit.

Hate to tell you, fat mike looks like a douche lol even if it was unexpected the kick to the face? The fcks ur problem? Douche baggery.

Welcome to punk rock you fruits!

I love punk music its great !!! But the damn dirty punks are the ones who ruin it !!!

Fat piece of shit. You should make a song called "Knock down the people who make you cuz I'm a piece of shiiiiittt!!!"...

Fat Mike is a bigot.

no different than knocking a fcker down in the pit and helping em back up. look up the video of Maynard from Tool holding a stage rusher down while he finishes his performance... the mans a beast!!!

NOFX fcking sucks. This fat fvck hits like a girl. What a pssy.

Defonce hit that girl in the face harder than this.

it would of been better if nofx was actually a cool band. And no apologies.

When did Lars start singing for NOFX?

That kid should have had that done to him solely because of the outfit he was wearing.

If NOFX is punk rock then the Backstreet Boys are a metal band....

come on stage, you deserve whatever comes your way whether it be a hug or punch in the face. that is the risk you take for your fleeting 2 seconds of fame.

"When did punk rock become so safe. When did the scene become a joke. The kids who lived for beer and speed now want their fries and coke." One of the best NOFX songs, surprising as its on such a new album but that song rips.

idiots who jump onstage and grab people; DESERVE MUCH WORSE.

Lose some weight and maybe you won't have spine and neck problems.

Attention anyone who'd rather go see a "hardcore" show instead of NOFX: suck my c-ck you gay gots.