Slipknot frontman on leak of new bassist's identity: "I was so upset" 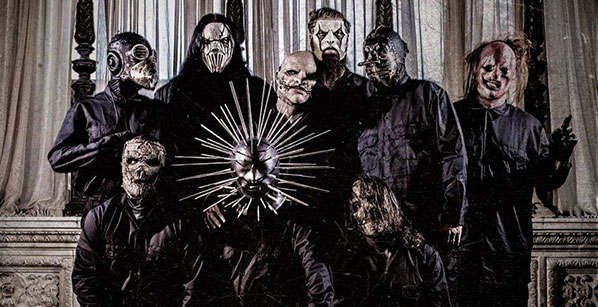 On October 2nd, Slipknot frontman Corey Taylor made an appearance with radio host Corey Taylor (a female of no relation) of www.coreytaylortalks.com.

During their chat, Taylor admitted that he was "so upset" when fans figured out the identity of bassist Alessandro "Vman" Venturella via his hand tattoos, though Taylor was careful not to actually confirm Venturella's identity. Here's what Taylor had to say about the band's new bassist and drummer (rumored to be Jay Weinberg):


"They're not official bandmembers yet, but they are people who play with the band. Time will tell whether or not they're, like, full members."

"With this band, you earn everything. You're not just given that shot; you have to earn it. And so far, they're doing really well. And we're really enjoying jamming with them. But we're keeping it kind of on the DL, but not really, 'cause somebody already pointed out the tattoos. I was, like, 'Why didn't we make him wear gloves?' I was so upset. I was, like, we thought of all this stuff. We put the hood on him and then the mask, and it was, like, 'It's really hot, guys,' And then there is his tattoos for everybody [to see]. I was, like, 'Well, we missed the mark on that one.'"
Tags: Corey TaylorAlessandro VenturellaSlipknot

Yeah no one really cares. You guys are terrible.

After reading this, I realized that I wasted valuable jacking off time to Gianna Michaels.

Who let the children get on the computer

Slipknot frontman on shutdown of Gayjuggaloporn.com: "I was so upset"

The tattoo is real

They still perform in masks lol the 90s are over bud. this gimmick makes their intolerable music even worse.

^You all seem like pretty fun people to be around, really. Trolling isn't funny unless you're 12, and if some are you serious, why bother taking the time to write that if you don't care? Metal fans are so bitchy.

On the D Lo, I'm sayin you versus me, though We can do this shit right here in front of your people

Funny everyone wants to talk shit, but wont promote their shitty fcking band. All you asses are just fcking jealous. Go suck one and then make a comment.

Why do metal fans have to such self richeous opinionated douches? Every negative comment made he was made by someone who grew up listening to Slipknot.I guess being an internet tough guy is pretty easy though.

How much does it REALLY cost to book your favorite band for a show?
Motorhead frontman Lemmy worth less than $650,000 at the time of his death
true stories? Or urban legends?
King 810 brings guns to a guitar fight
King 810 wearing their arrest for assault like a badge of honor