dancer in new Mastodon video speaks out on controversy 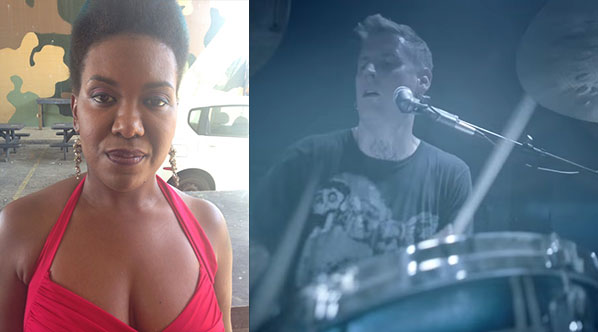 One of the dancers who appeared in Mastodon's controversial new video for "The Motherload" is now publicly defending the band and the video. Here is what "Jade" had to say:


This week has been an interesting one. At the end of August, I danced with some friends for Mastodon's new video, "The Motherload". We were stoked about it. Twerking in a metal video?! Unheard of! We came from varying backgrounds, classical dancers, pole dancers, strippers all nervously waiting in the common area wondering how we'd all fit in. Well that was a piece of cake. As soon as the music played, we felt jazzed—in fact, they asked us if we'd prefer to dance to some hip-hop instead and then they'd remove the sound and add their track. We declined. We all waited patiently by our machines for weeks, waiting for the video to drop. It dropped Monday.

Within minutes of the video dropping, there was a serious backlash. While most people seemed to "get" the band's shout out to their hometown, Atlanta, others called it racist and sexist. Some people even called us dirty niggers and whores. Funny, the most sexist and racist sentiments came not from filming the actual video, but from a subset of metal fans who thought we simply didn't belong. If anything, the video shoot was welcoming, the band clever and pleasant, and the girls bonded almost the second the music dropped. Much like the band, we weren't concerned with thin, knee-jerk reactions to asses and twerking.

We came across from different walks of life. Real deal ATL strippers joked with me—I'm a pole dance student with a background in African American literature and cultural theory, while my ballet dancer friend laughed with the other ladies, doing pirouettes in between takes. If you read the interview in which the band says that we were having fun with each other and not for the male gaze, you should know he was totally right. My other friend who is the best conglomeration of every dancer there—pole dancer, stripper, PhD in women's lit and African American lit focus, and a dance instructor—could be the poster child of what this was. Women having fun with each other. Praising each other. A glimpse into what we do and that we are bigger than what we do.

One of the reasons this video, for me, is garnering so much attention is that truly the women are not just asses—and there are a lot of fantastic asses in the building—but shown as 3D people, which scares folk. Another is the concern for cultural appropriation. From us and from them. The fear of metal being "tainted", the fear of the band using a dance form associated with black culture for their own gain. These fears boil down into my one response: we all belong. This band made it such that by the time the shoot was over, we all went home and got the track. (I'm playing it on the jukebox at my local bar as I write.) This video wasn't a spoof or mocking or satire, in my opinion. The guys are ATL homegrown. As much as metal is in their bones, so is trap music, so is Old Fourth Ward, so is Magic City. They repped Georgia not out of exploitation, but because it resonates with them and is a part of them. This video proves that metal can reach out and can be reached out to without parody, without hierarchy, and it is a good thing.

Ask us if it was racist or sexist. We were the ones right there experiencing it. I'll tell you from my view: no.
Tags: Mastodon

im more offended by mastadon's complete lack of originality perpetuating shit that even a dimwit like miley cyrus played out 2 years ago. way to saddle up on moron culture with the rest of the idiots guy!

Atlanta and asses go together like spaghetti and meatballs

A stab at the mainstream failed. Trying to sell metal to 19 year old Little Wayne fans via the twerking trend with a "controversial" video smells of the Warner Bros. conference room. Nice asses though. Good work ladies. Lame Mastodon

Whether or not the actors in these videos feel objectified is not the issue, but rather the image they're purporting of women is what has many in uproar. She claims to have had fun and not have been offended, which is totally cool except it doesn't address the sexualization of women that 'twerking' is - which is again what most people are upset about.

no one cares about whether or not you feel objectified but rather about the objectification of women this pop culture disseminates. And yes, society has portrayed this garbage for decades, but way to further portray it and claim innocence to it. Even ignorance of it, when you're a post graduate. Some good that education did her.

anonymous posted 1 hour ago I like asses, I like mastodon. That video was fantastic. this guy gets it, music videos are so useless today anyways, why cant people just sit back and enjoy some nice asses and mastodon without having to make a "controversy" out of it.

Like lamb and tunafish not spaghetti and meatballs... get it right! Duuhhhhhh

Stop being so fcking PC. They weren't forced to do it.

It isn't sexualizing women if they willing want to be protrayed as such. Sure, culture does make women into sexual objects, which is disgusting, but they still should still have the ablitity to display their sexuality if they want. You are making them into an object of your own by telling them what they can and cannot do.

Wait, so men created twerking and are now holding guns to women's heads forcing them to objectify all women? The issue is far scarier than i thought!

Personally, I'm not bothered by the women in the video or their decision to do it. I'm bothered by the fact that Mastodon thought this was a good idea and that they were "pushing boundaries". If Mastodon wants to start getting played on hard rock radio and attracting the likes of Nickelback fans, that's cool. I hope they enjoy their piles of cash and fancy speedboats, but they're losing their integrity big time. Why are they trying to bring hair metal back?

This video went so far over peoples heads it's hysterical. Everyone is entitled to their own opinion, blah blah, but if you have a problem with this video you probably don't have a thread of fun in your soul. Let artists do whatever the fck they want. I thought it was hilarious, fun, and bizarre.. and the song rules. I love when the lame ass age old "elite barriers" are transcended by bands that don't give a fck. Hell yeah, Mastodon.

^ get a load of tinfoil hat guy over here.

Of course she's going to defend it, she's a dancer and that's her job. She got paid, and probably had a lot of fun. At the expense of the ever growing objectification of women as fck objects. They may have just as well put a crease on a stick and waved it around to try to sell records This was a massive PR move to cause controversy and they've achieved what they wanted.

Its not different from any other metal (or other genre) music video that does itself by makeing women look like fun toys all the time though. I'm pretty sure this isn't how every woman wants to be repeatedly represented, but a lot of women and men alike don't really care about the greater cause unfortunately.

I hope you all do realize you JUST proved what she was just saying. Good lord y'all are a bunch of nitwits.

first off a whore with a degree is still a whore. Plain and fcking simple. Shit pisses me off when dumb c-m guzzling sluts march on about personal self righteousness when they're still shaking their std dick killers and expecting to be respected. shut up you c*nt, you earned the slut shaming. secondly, nothing wrong with what mastadon did IN THE SLIGHTEST. if anything, they're just reintroducing the very ideals and controversy that have made metal most reviled in the world...

How much does it REALLY cost to book your favorite band for a show?
King Conquer ex-member says the band left him on the side of a Texas road
Easter play accidentally uses Lamb of God logo on tickets
The Ataris frontman melts down during show, hates his own drummer
watch what happens when trash cans enter a mosh pit