Emmure is involved in a new beef, this time with Upon A Burning Body

Now that Emmure has officially ended their long-standing feud with The Acacia Strain, they seem to have quickly replaced it with a new one involving Upon A Burning Body.

You may recall the stupid publicity stunt put forth by Upon A Burning Body to promote their new album? Well, Palmeri was asked about said stunt in a recent interview with Hatebreed frontman Jamey Jasta and called it "low class."

As noticed by ThePRP, Upon A Burning Body has now responded, albeit with the help of a fan, whose Tweets the band shared (i.e. Retweeted). You can seem them below. How long before Frankie Palmeri and UABB vocalist Danny Leal trade blows? 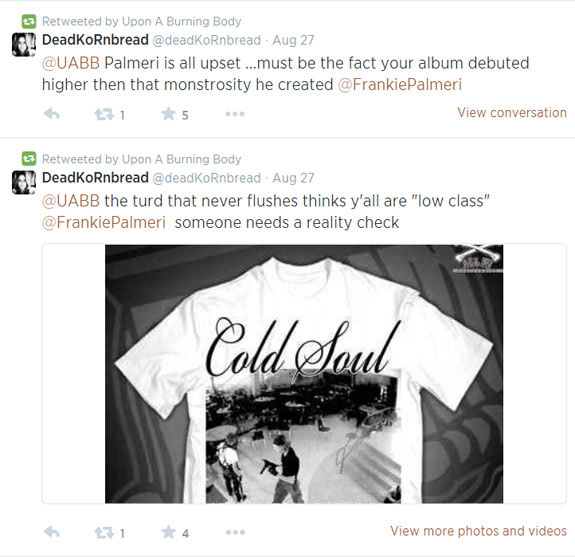 UPDATE: Well, that was quick. Just before we posted this blog entry, Palmeri took to Twitter to explain that he has apologized to UABB. How anticlimactic! Oh well.

The interview i did with @jameyjasta was done pre- Mayhem tour. I have already personally apologized to @UABB for my off the hip comments.

if the guy who tried to make money off selling Columbine merch is calling you low-class, something is probably fcking wrong.

I'd wear that shirt

Theres a big difference between 'rude/obnoxious' tee's and then a 'columbine' tee. Who the fck would even buy that? I'm not a bleeding heart for school shootings but It's not an 'edgy' shirt, it's just a stupid waste of time to even put it up. No one has bought it.

I wish I bought that shirt because fck you

Listen to the entire podcast. He wasn't calling them out and Jamey Jasta agreed. It was low class. There's no beef.

Here we go.Stirring the shit pot of the lowest common denominators. Both bands are simply terrible.

Jesus webby, I usually try to stick up for you and I hate both of these bands, but you're acting like a total fcking high school girl. Stop trying to stir shit up when nothing is there. You sound like the fcking Perez Hilton of metalcore on this one. Stick to posting tour dates if this cry wolf shit is all you can come up with.

I'm sorry but anyone who likes emmure of Frankie for that matter should go fckimg kill thereself already. Frankie should be beaten into the fcking ground. He's such a disgrace to fcking hardcore. And for upon a burning body ? Again, who cares you guys are already washed up.

how embarrassing. webby thought he had the news scoop of the day, now he's stuck with an article that isnt even true

Palmeri is the only person I'd give the dimebag treatment to. I'd gladly go down in history as the person who ended his reign of complete idiocy once and for all.

Jesus webby, I usually try to stick up for you and I hate both of these bands, but you're acting like a total fcking high school girl. Stop trying to stir shit up when nothing is there. You sound like the fcking Perez Hilton of metalcore on this one. Stick to posting tour dates if this cry wolf shit is all you can come up with ^^THIS^^

We never said this was "news." That's why I put it in the blog section. So many babies around here.

People who don't know how to distinguish Blog posts from News posts are not stoked.

webmaster posted 17 hours ago We never said this was "news." That's why I put it in the blog section. So many babies around here. Dude, eat my boogers. Just because you choose to call it a "tidbit" doesn't mean you aren't responsible for posting erroneous shit.

haha... this wasn't supposed to be a CNN expose on potential Frankie Palmeri feuds. It was pointing out some minor drama between he and UABB. If the fact that a potential "beef" seems to have been squashed by Palmeri's apology renders this piece "erroneous," and this has negatively impacted your life, so be it. Have your attorney call ours and we can work out a settlement (would a $5 Applebee's gift card suffice?).

Keep Calm ...You Got Served

Hahah I actually enjoyed that. Anyway all I'm saying is this particular tidbit comes off as a little desperate for hits, and I think more bands would be trusting of this site if they weren't under the impression that you were the kind of guy who would post someone's death photo for half of a ham sandwich.

Easter play accidentally uses Lamb of God logo on tickets
Kids cover Slipknot in video reinterpretation of 'Duality'
watch what happens when trash cans enter a mosh pit
Bleeding Through's Brandan Schieppati: "Is it ever going to be enough?"
How much does it REALLY cost to book your favorite band for a show?