(We've covered what we consider to be dumb band t-shirts before, including one from this very band, so why stop now?)

Earlier today, I Declare War advertised a shirt via Facebook which they called their "OD Chris Farley shirt." As you can see via the graphic below, the front shows a death scene photo of late comedian Chris Farley while the back says, "Even the greats die alone." 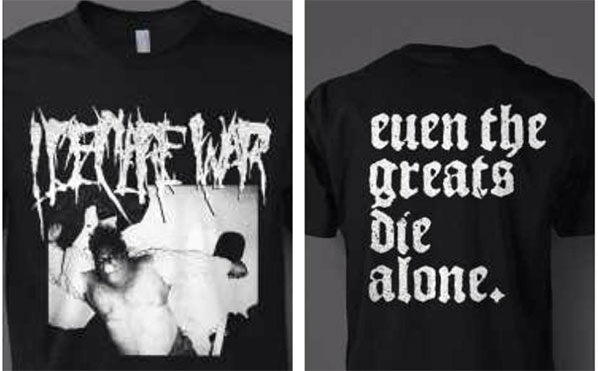 I don't know. While some rebellious teenagers might wear something like this, do they even know who Chris Farley is? Meanwhile, I'd like to think that older metal fans would pass on this one. For me, the comment from one Ryan Cobern on the band's Facebook page (below) sums it up nicely.

Apparently, Full Of Hell already used this same photo on a t-shirt too, so we can't even call it original.
Tags: I Declare War

Full Of Hell did this first and theirs was actually cool. This sucks

I own the Full of Hell shirt, it's dope. This is just dumb

Chris Farley is a legend, I've never heard of "Full of Hell". I love I Declare War's music. I think they're an awesome band. However, IDW are not legends. Putting that sh*t on a shirt is disgusting. One day, bands need to realize that they are in a certain category, and people like Chris Farley are way above who they will ever be. Putting that on a shirt is disrespectful to his memory and to his family members (even though he made mistakes....we all do!!!). You know it and I know it.

Since when did fans of 'death'core become offended by death? A bunch of pussies, everyone that is complaining.

I'm not a fan of the band, but i sort of agree with the sentiment. All of our heroes will die and fame does a number on lonely/depressed people... We idolized this guy for his humor and he died an extremely unfunny death. It's the great contradictionof life, but people can't seem to come to terms with it. Also, bands like to push buttons. I'm pretty sure this isn't the worst i've seen.

The Farley Overdose band> both shirts. Full Of Hell is good shit though