Thursday, July 10, 2014 2:08 PM PT
Former Testament bassist, Greg Christian, who was ousted from the band earlier this year, continues to post Facebook messages explaining how he feels he's been treated unfairly by the other members of the band. Earlier today, Christian revealed that he earned roughly $38,000 (before taxes) performing live with Testament in 2013, which he calls "cruel and unusual." Here are his full comments:


I know last week I said I'd talk about a band meeting that happened in São Paulo - I don't care anymore - I'm done airing the ridiculous, and (believe it or not lol) I'm saying my final peace here - I could go on for as many years as I was back in Testament with stories of being slighted, lies, and greed, but my only real point or complaint is about live performance money. I don't own any part of the records or anything else and don't really care. But to use my name and likeness, as an original member, along with a 'recognizable personality' (for lack of a better term) on stage, along with what I actually brought to the stage, pretty consistently (just look at YouTube) and refuse to give me anything other than the beyond ridiculous deal of NOTHING EVER of show money - though I went through all the shitty travel, and all the other 'downsides' to everything, and had my face on the ads, did all the meet n greets, signings, and everything else - is simply wrong. Everything else aside - I worked for and earned, at least some kind of piece of that. That's undeniable. And I'd've been happy with a much smaller piece than I felt I was worth. But not zero.

I believe it's personal. Directed solely at me. And I think there's a high likelihood it's a direct result of words I spoke back in '96 - though not very tactful, I wasn't exactly wrong about. And to push a petty grudge like that to this point is something I just can't understand. I would never do that to someone I hated, but to do that to someone you spent 20 years on the road with and helped you get where you are??? In my humble opinion (for whatever it's worth) - that... that leaves me speechless - I just don't understand it.

FYI - for ALL the shows I played in 2013 and ALL the travel and ALL the time away from home and family - before taxes $37,775 - after taxes about $25k - with no PD's and our travel schedule that's actually more like about $21k - ya. that's reality - and considering the $$$ Testament brought in for live performances in 2013 - cruel and unusual - Thanks guys. Love you too.

I'll post a pic of my W2 in the comments. Don't want it to be the 1st thing people see, but if anyone has any doubts - there it is -

Anyway... I know I can be a long winded fuck but I finally said my peace... this signals an end to my three weeks of throw-up Thursdays. I don't know how anyone else even reads this shit. Makes me sick, but I had to let it out, and now that I have this summarized, it may be time to see what an attorney thinks... I dunno??? but I'm not holding my breath lol. anyway... on to new music... 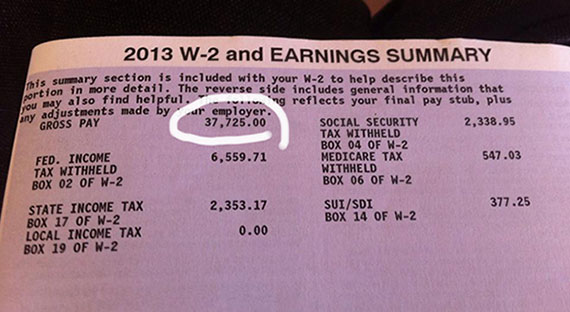 Oh no, I only got paid $38k to party every night and do what I love

Honestly, it sounds like this guy busts his ass for a measly $25k take-home. I regularly sleep for 8 of my 12 hour shifts and I make more money than him. Not taking sides or saying Testament screwed him, but if his focus is the money, he probably should have stopped playing in a metal band about 19 years ago. TL;DR Yeah, life sucks. No, you won't be seeing any more of that money. No, you can't have your 20 years back. Welcome to reality and move on.

That's more than some. Get over it.

If youre not happy with your 38,000 dollars then send it to me, I wont complain about it like a whiny bitch.

These are grown old ass men. I'd be mad if I was in my 40s/50s pulling in that measly pay.

The dude is totally right. It is fcked up.

He easily clears 25,000 a year playing for testament

Boo fcking hoooo. Try being an e-1 in military, being far from home and getting paid jack shit. fck you cry baby.

Should have gotten a job.

So hes working class poor, like most americans. I used to work at a bank, and most people only make $15 or less. He makes more than some people who work 8 hours a day, a labor job. I can see why he's mad, but he's making more than people who work hard. I hope he don't live in California, making that much you can live in the ghetto in a apartment.

How about this you whiny bitch. Go record your washed up shit in your basement, schedule tour dates and support your hemorrhoid ridden old ass on the road without any help and try to make a least half of that.

Seems pretty fcked up, and like you did indeed did get screwed, but you're a grown 40, 50 something year old man..... stop bitching and being teenager style dramtic about it online. Good god.

thats more than the majority of people in touring bands i'm sure and prob more than him getting a real job, at least judging on the amount of education i'm sure he has

This guy is hilarious. 38k before taxes is what they CLAIMED. I'm sure that's true, but I'm also pretty sure he made another 40 off the books. That's what bands do with clean cash from these tours. This dick head knows the rest of the band won't say he's lying because they'll oust themselves as tax-evaders. Big deal, get a real job now hack.

YO! HAVE YOU SEEN THAT NlGGA FACE? STOP SPENDING ALL YOUR ROAD MONEY ON CRYSTAL AND YOU'LL TAKE HOME A LOT MORE $$$.

How much does it REALLY cost to book your favorite band for a show?
Motorhead frontman Lemmy worth less than $650,000 at the time of his death
true stories? Or urban legends?
Jared Dines vs We Are Triumphant and 'Things sketchy records labels say'
The Black Dahlia Murder singer calls out 'fans' who steal his band's music