Breaking: some of your favorite musicians like to have casual sex (via Tinder) 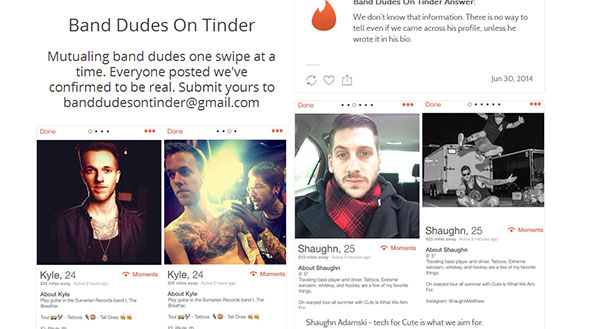 Call me ignorant, but I didn't even know what Tinder was prior to this morning when someone sent me a link to a Noisey article titled "Here's Your Chance to Bang All the Dudes Playing Warped Tour." A trip to Wikipedia reveals that it's an app used to "facilitate telecommunication between mutually interested users." Further research suggests that it's more like an app used to facilitate one night stands.

Anyway, an enterprising individual on Tumblr has put together a collection of musicians et al who have profiles on the service, including members of Falling In Reverse, Every Time I Die, Black Veil Brides, I The Breather, Slaves, For All Those Sleeping, Dayshell and many more. The administrator of the Tumblr page says that "everyone posted we've confirmed to be real." We're not sure how they did that, but whatever. Whether you're looking for love or are just curious, you can see the profiles via banddudesontinder.tumblr.com.

To summarize: touring musicians like to have one night stands. Shocking stuff, eh?
Tags: Every Time I DieI The BreatherFor All Those SleepingJonny CraigDayshellRain City DriveBlack Veil BridesFalling In Reverse

THIS IS AN OUTRAGE! NEXT YOU'LL TELL US THEY PARTAKE IN NARCOTICS AND HAVE A LESS THAN SUNNY DISPOSITION FOR LAW ENFORCEMENT! WHERE WILL IT END?!?!?!

The future is here.

Hide yo kids hide yo wife

visit www.tinderguru.com to get laid tonight!