King 810 has taken a lot of heat since their signing to Roadrunner Records. First was the weapon-filled promo photo, then their appearance at Rock On The Range 2014 with a gun-weilding entourage. Responses tended to echo the "wow, you guys are so tough" sentiment. So when singer David Gunn and bassist Eugene Gill were arrested last week for the critical beating of a man in 2013, King 810 finally got the opportunity to prove to the world that they really are intimidating.

Shortly after news of their arrest broke, members of the band's camp posted a photo of the arrest on their Facebook. I can't recall a band being involved in an arrest and then using their social media accounts to spread the word, complete with photography. But they aren't done, because just hours ago, King 810 used their Facebook account to post the court document below, which displays the official charges, bail amount, etc.

Look, it's possible that the assault thing was justified. Maybe the guy raped somebody's sister? Who the hell knows. I'm not going to convict Gunn and Gill prematurely. But posting this stuff is something a 17 year-old kid does: "Hey, look at me! I'm tough! See?!?!"

Obviously, they're walking a fine line here. This might buy them street cred with some, but if you're legally prohibited from touring, or have to use your music income to pay fines and legal fees, being in a band is rather pointless, isn't it? 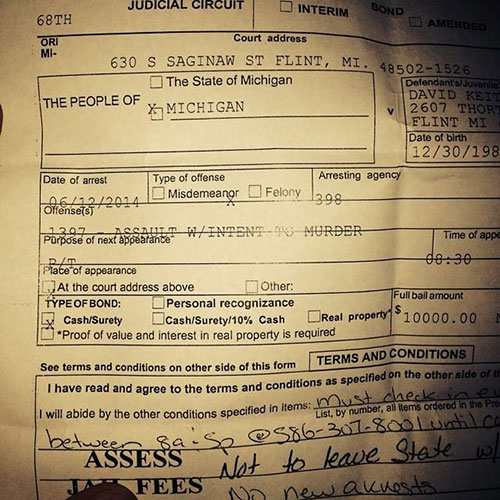 Pee in your own mouth just to see what it's like.

LOL at this; I can see what they are going for but it's going to blow up in their faces if not now eventually. Good luck paying back that advance to Roadrunner. No touring=no money being made.

This music wasn't good in the 90s so it's definitely not good today. this band is horrible.

How the hell is assault with intent to murder a misdemeanor?

I hope everything bad happens to them

These guys need to relax.

Would love to see these bitches get jumped at a show, anyone who has to go out of their way to act like they're tough or hard, clearly isn't.

king 810 vs the Swellers at the Flint Battle of the Bands this weekend.

the singers real last name makes him so not tuff

I know what/who would take care of these nerds, in three words…FURY OF FIVE.

not true. Lil Boosie made 5 grand in prison making mixtapes, and other musicians have done it

gorillatriscuits posted 54 minutes ago I know what/who would take care of these nerds, in three words…FURY OF FIVE. I believe they fall within Cold As Life's territory

real recognize real not surprised nobody on lg can understand these guys, you guys haven't stomped the streets like we have

real recognize real not surprised nobody on lg can understand these guys, you guys haven't stomped the streets like we have Band was started by a member of Chiodos from Richy richvilles of Texas. Shut up sage.

$10,000 Bail for something with the word Murder in the charge GET fckED!! Bullshit ass fake paperwork! gaygerios all the way!

real recognize real not surprised nobody on lg can understand these guys, you guys haven't stomped the streets like we have ^^^^^^ Please shut up. No real gangster has ever heard of Lambgoat, much less would ever post on it.

2607 Thornton Ave? He lives two seconds away from the nearest McDonald's. Consider the career move, please.

"stomped the streets" god so pathetic, exactly the kinda people who would listen to this idiotic band. white trash dudes with face tattoos are stoked.

I'm from Michigan and $10,000 bail for that charge is actually very realistic. And Jason Hale (Chiodos) didn't START King, he was just a member for a short while, which isn't that strange considering Chiodos is also from Flint and Jason was friends with them. Just because he is in a band like Chiodos doesn't mean he is nothing like the guys in King - they were all friends/hung out for a reason.

People were claiming that the singer was not from Flint and that the charges were fake, so this proves otherwise. Now people can find other things to accuse the band of because they now know that David lives in Flint and that they practice what they preach. Enough Said.

Im pretty sure that is Davids middle name. Dumbass.

The offset of the paper print marks the charge as felony but since it was off center, the mark isn't in the right box (and is clearly closer to the box next to felony). Second, you cannot see the entire sheet, therefore any person with any rational thought in their head would understand that when a name is on a report like this, it will also have the middle name of the individual. I think the people that hate this band love them more than the people who love the band.

I'm from Michigan and $10,000 bail for that charge is actually very realistic. And Jason Hale (Chiodos) didn't START King, he was just a member for a short while, which isn't that strange considering Chiodos is also from Flint and Jason was friends with them. Just because he is in a band like Chiodos doesn't mean he is nothing like the guys in King - they were all friends/hung out for a reason. Because they suck equally?

From Michigan, got the fck out. Unlike the some bands that talk shit and don't do anything when you see them face to face. Flint, Detroit, are hard ass fcking places, and you will get checked when needed. This was just a fight and they kicked the shit out of some dude with a big mouth. Assault with intent is almost every charge when it's more than 1 dude beating another dude. They will get pled down and probation with monitoring.

This band is such a fcking joke and waste of space. just by posting this court document it only shows they care more about having the "street cred" from the mean streets of Flint than anything else. I hope RR drops these losers and then they can go back to playing local shows for their "family" that sucks this bands dck every time they do something. Kill yourselves, please

Thanks google maps for showing me how bad and tough the suburbs of flint are. I might get my polo shirt jacked.

i had a 30k bail for threatening people associated with gangs and real hardcore crews. fake ass gays lol