Carnifex vs Conducting From The Grave rap cover feud

Though I'm sure it was unintentional, it was amusing to see California deathcore band Carnifex take a stand earlier today on Facebook against metal bands covering rap on Facebook, only to have California deathcore band Conducting From The Grave promote their Dr. Dre and Ice Cube rap cover on Facebook like 30 minutes later (see below). If nothing else, it certainly made for an amusing contradiction in my Facebook news feed today. Anyway, they clearly don't agree; so, like any legit rap artists would be, we now consider them to be feuding. Shit's about to get real. Or not. Probably not. 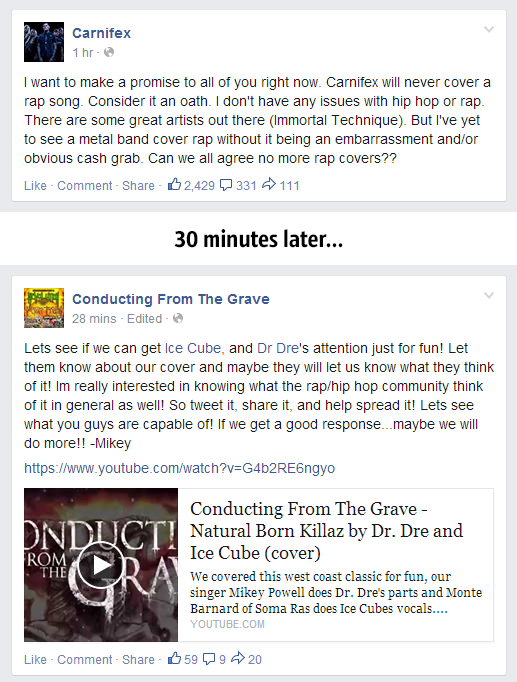 UPDATE Ok, I thought it was pretty obvious in the post above that there isn't an actual "feud" between the two bands, but apparently not. So much for subtle humor. For those who think we're reporting news about some actual quarrel: Falling In Reverse put out a horrible Coolio cover not too long ago, which is what Carnifex was really talking about. But now Conducting From The Grave is online telling people not to "believe the Lambgoat hype" about a feud, haha. Oh well. Now there is a real Conducting From The Grave and Lambgoat feud ;-)
Tags: Conducting From The GraveCarnifex

What the fck are you doing, Webmaster?

pretty sure it was about Falling In Reverse.. but at least you tried *pats webmaster on the head*

Oh. Carnifex saying they like Immortal Technique. They must be real hip hop fans. Along with every other hardcore and metalcore hipster. both these bands STINK

You realize you're the one doing most of the sharing on this.

whoever the 12 year old is that has taken over lambgoat as of late... I think he/she needs to be replaced

anonymous posted 52 minutes ago pretty sure it was about Falling In Reverse.. but at least you tried *pats webmaster on the head* lol, i know. Why can people not comprehend what they read. We know there's no real feud.

Coming from a band that is basically a suicide silence cover band this makes sense. Nice immortal technique shirt ripoff carnigays. So original.

Coming from a band that is basically a suicide silence cover band this makes sense. Nice immortal technique shirt ripoff carnigays. So original.

Emmure should do a rap cover.

100 percent sure this was in reference originally to the awful falling in reverse thing... carnifex have been our boys for years, we've toured with them 3 times, <3 you guys! slow news day much? -abernasty cftg

This article is full of shitload.

You updated the article without updating the title? Terrible.

Carnifex and Conducting from the grave are great metal bands, that's a fact. Comparing Carnifex to Black Dahlia or Suicide Silence is a ridiculous statement. Carnifex telly has a unique sound to every record that cannot be duplicated

You guys are a bunch of pricks anyway, so who cares what you have to say - much less, who cares about a "feud" between a forum and a band? Chrissake. Grow up.

Pretty sure no one in CFTG actually cares if Lambgoat dislikes them. You guys did actually post a misleading article, which caused CFTG to respond. Carnifex posted that THEY will not remake a rap song, which NO METAL BAND EVER SHOULD REMAKE A RAP SONG....EVER. CFTG did a decent remake, but it's still a crappy rap song.

"You updated the article without updating the title? Terrible." You are an extremely gay person.

Conducting From The Grave posted about this whole thing twice on their Facebook. They must be really happy to be getting some attention for a change.

Neither of these bands are metal.

How much does it REALLY cost to book your favorite band for a show?
Motorhead frontman Lemmy worth less than $650,000 at the time of his death
For Today frontman offers non-apology to LBGT community, then deletes it
true stories? Or urban legends?
Varg Vikernes (Burzum): "I no longer play metal music"