move over Emmure, Attila has a really classy shirt too

Yesterday we discussed a stupid t-shirt that Emmure had removed from an online merch store. Regardless of why the shirt was taken down (contrary to our assertion that it was due to controversy, the band says it's because the shirt was dated), it doesn't change the fact that it was a dumb shirt.

Earlier today, someone on Twitter kindly let us know about a tank top that's currently available (and has been for some time) on Attila's merch site. You can check it out below. Honestly, this is even more pathetic than the Emmure shirt. Perhaps I've forgotten what it feels like to be nineteen years-old, but I want to know who wears stuff like this. I can't think of any scenario (other than outright parody) in which donning this tank top wouldn't make its wearer feel completely embarrassed and/or desperate for attention. 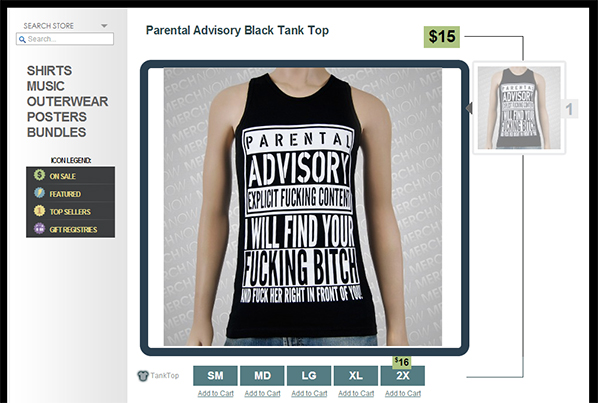 Would honestly love to see someone in a 2XL version of this. It would be fcking hilarious.

Why would that be hilarious?

Every time I think it can't get any worse, these faaggots outdo themselves. Congrats.

Congrats webmaster, you have a new calling. Keeping up with shirt designs. Anything for a headline, I do not know what's worse, the idea of the shirt came to reality, or the fcking webmaster gives a fck about shirt designs. maybe Fox will hire you

^^^must be someone from attila.

^band member. like any of you fggts would make good on this shirt's threat.

What the fck is wrong with these bands

people = shit none of these bands will come up with something as simple, funny and to the point as that. thats right idiots you were outdone by slipknot like 15 years ago

Get off my lawn!

like any of you fggts would make good on this shirt's threat. fckING LOL, this whole post is nothing but win \m/

Hussie wrote that the words for that shirt

Both t-shirts are quoting the bands' lyrics. I don't understand what is so controversial about this.

The band A Future Corrupt from Buffalo, NY has some really frigging obnoxious shirts too. Honestly, they are much worse than this one. I think they have one that says something like "lick c*nts then shoot the bitch" or something like that..or maybe that was a different band from around here...anyway yeah. I can't think of any public place I could or would want to wear that

Sad thing is, I've seen mor girls own this than guys.

So I guess advertising that you're a rapist is cool.

No one in any of these suburban white boy gay mosh bands would ever do anything remotely like this shirt says. And even if they did they'd get stabbed by basically anyone with a brain. This band is shit and so are their ugly fans who buy into their garbage joke of an image. Middle finger.

I want to make a shirt that says, "fck you, you fcking fcker!" I totally came up with that just now. Honest.

My original comment got deleted. LOL at censoring this rabble.

What the...and now it appears! Either cookies are being dumb or HOLY SHIT GHOSTS.

This all goes back to korn. It's really hard to calculate the irreparable harm they've done to heavy music. Aside from this, you have also have to remember that they are responsible for limp bizkit's popularity. The fact that real music fans have to deal with trace amounts of nu-metal in the music world today is unacceptable.

How much does it REALLY cost to book your favorite band for a show?
watch what happens when trash cans enter a mosh pit
true stories? Or urban legends?
Tyler, The Creator calls Bring Me The Horizon's Oliver Sykes a "Tumblr F*g F*ck"
Motorhead frontman Lemmy worth less than $650,000 at the time of his death