'This Is Boston' participants still trying to find missing money

Nearly a year ago, several notable Massachusetts bands took part in a benefit show to aid victims of the Boston Marathon bombings. The event, dubbed This Is Boston, was held on May 6, 2013 at Quincy's South Shore Music Hall and featured Converge, Slapshot, Wrecking Crew, and Doomriders, among others. By all accounts, the benefit was a success, with roughly $14,000 raised for the One Fund.

Yet a year later, a significant portion of the money has yet to reach its destination, and one of the benefit's key promoters, Mike Eleftheratos, has disappeared from the scene. In an interesting new piece over at Vanyaland, the entire saga is detailed; read how participants went from feeling good to feeling duped in just a few weeks.


But the lack of specifics began to rub Jacob Bannon, singer for headliner Converge, the wrong way. He spent months after the show following up with Eleftheratos trying to get confirmation of the money's transfer to the One Fund, and was repeatedly met with excuses. By June 8, in an email to Eleftheratos, Bannon stated: "As of now we are getting the impression that there is no donation that is being made by your promotions company."

When we reached Bannon by phone, he explained further. "This sort of thing isn't complicated," Bannon says. "Our band independently raised money for the event, we sold shirts through our store, and gave 100% of the proceeds. We do that all the time; money for the Red Cross, we raised money for Japanese tsunami relief, we've given money to Dana Farber for cancer research. We try to give back, we do what we can."

You can read the entire article here. 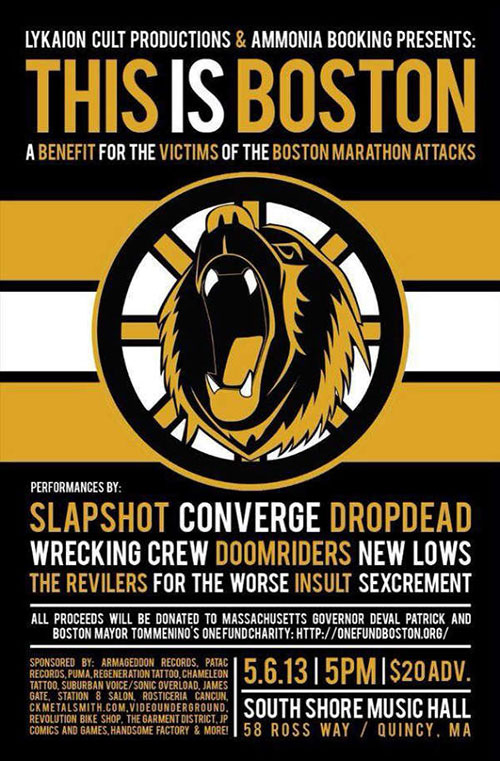 prolly went to where the missing hellfest money went.

this just in: Mike Eleftheratos has just been kicked out of CYC

He was in the Consititution Yacht Club?

Maybe it went to a charity of Tim Lambesis choice. Or his defense funds

How much does it REALLY cost to book your favorite band for a show?
Motorhead frontman Lemmy worth less than $650,000 at the time of his death
Tyler, The Creator calls Bring Me The Horizon's Oliver Sykes a "Tumblr F*g F*ck"
true stories? Or urban legends?
Hoods frontman really wants to fight Victory Records owner Tony Brummel