Yesterday Noisey posted an interesting blog entry in which they contemplated how fans of Austrian Death Machine should treat the outfit's new release, Triple Brutal, in the wake of the whole Tim Lambesis murder-for-hire saga. Obviously, many of those quick to spend money on Austrian Death Machine's music in the past may now be concerned this time around regarding their money's ultimate destination (i.e. the Lambesis defense fund). To proactively combat these reservations, in February Austrian Death Machine revealed that proceeds from the album would be donated to charity. At the time, the only details provided were as follows:


"Royalties from Triple Brutal will be going to the World Vision Charity. For more information on the charity you can go here: http://www.worldvision.org/"

Some fans are still apparently confused, however, with one posting the following on the band's Facebook page on April 2nd, the day after the album's street date: "Sorry. Not paying someone's legal fees." On April 3rd, the band's camp responded: "Proceeds from the album go to charity. Artery owns the record now and they're good people."

This all sounds great on the surface, but the devil may indeed be in the details. Exactly what are "royalties" and "proceeds" in this context? For starters, Triple Brutal was crowdfunded via Indiegogo. The entire take for the Triple Brutal campaign was $78,120 (less Indiegogo's fees). We're guessing that none of that money will be going to charity (to be fair, Lambesis never claimed that it would).

So what is going to charity exactly? Artery Recordings is handling the official release, and if they're not benefiting financially, why are they involved? Are they going to donate everything left after production costs? Let it be known that I have no information to suggest that Artery is acting inappropriately here. They are likely doing the right thing. But again, what are "proceeds" relative to Triple Brutal? Is it possible that there won't be any?


"Unfortunately, in this case neither Mr. Lambesis or the band approached World Vision before stating that proceeds of the record would benefit us. Regrettably, we've found over the years that individuals and businesses will make that claim, and not follow through. Our legal department is currently looking at the band's website to determine our next steps."

Watkins did note that "Lambesis can still make donations to the organization under the radar," but given all of the circumstances at play here, this seems highly unlikely.

Further casting a pall over the proceedings is the fact that many of those who originally contributed to the Indiegogo campaign aren't getting what they paid for. Thirty-three fans paid $250 each for an "All Snaccess Pass," granting them and a friend free, one-time access to any Austrian Death Machine or As I Lay Dying show in addition to dinner with Lambesis afterwards. For a slew of reasons, the chances that any of these people will get anything in return are beyond slim. And the three people that paid $500 for personal training from Lambesis? Right.

Fine, Lambesis is currently unavailable, and those perks will have to wait for logistical reasons (that's the best possible spin anyone can put on the matter). But what about the hundreds of people who paid for an early digial download or exclusive digipak of Triple Brutal. If Austrian Death Machine's Facebook comments are to be believed, many of those campaign contributors haven't yet gotten their money's worth (you can see some evidence below).

Perhaps miscommunication is to blame. It's possible that some charity is already benefiting, and that most ADM fans have in fact gotten the Indiegogo perks they paid for (sans the aforementioned ones involving Lambesis personally). But until more information is released and/or some facts come to light, you can expect that most of the music community will not be giving Lambesis the benefit of the doubt on the matter. 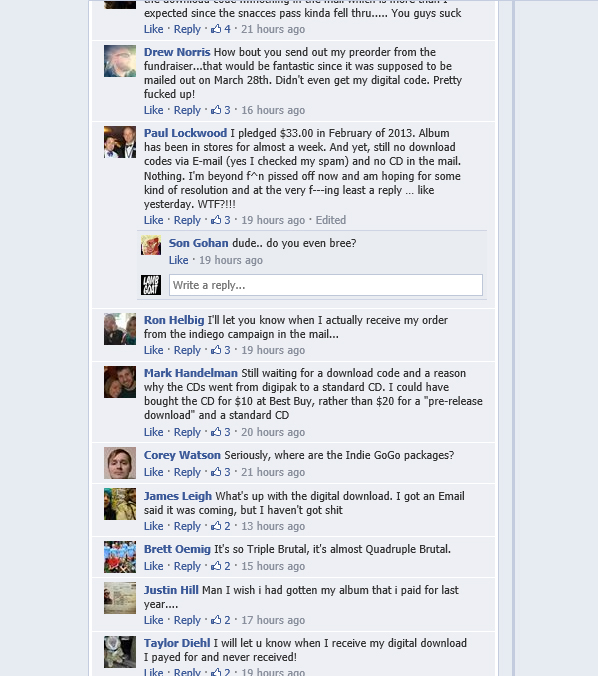 UPDATE: In response to this piece, Artery has sent Lambgoat the following information, which we thoroughly appreciate.


"We came into the picture a few months back licensing the record with Tim and we have been also helping with making sure the kids all got their packages. Every person who contributed either got mailed a package that included download links or have been notified there are a few things still coming. The only people that have not been sent packages are people that were suppose to get USB sticks and or the Vinyl packages. These items are still in production. Also if the people input the wrong mailing address and or email address of course their packages aren't their yet. People on indiegogo can also contact Tim's team there if there are still any issues with not getting their packages and we are doing are best to track it. Our friends are MerchNow have printed and mailed the packages for us and if I really have to post a ton of tracking numbers online to prove Artery helped get these kids their packages i will. Myself and the company I work for have always done legit business and have always done the right thing. We have a pretty solid track history as many can agree with.

"Also to address the matters of Tim's royalties going to charity. The World Vision charity is the charity Tim chose for the money to go to. Seeing that is it only 5 days after the release of the album i haven't received any money from sales yet. When we do statements the charity will be receiving a check in the mail from the team and everything will be done as we said it would. Why would i contact a charity before we had money to give them?

"People also ask why we got involved with licensing the record. Tim has been a friend for a long time. The opportunity to help release this record and get people their campaign packages was something i wanted to do. Tim stated he wanted to give his money from the sales of the record to charity and i see that being a very awesome thing. This is why I got involved.

"For those of you who haven't gotten your indiegogo packages can submit on the page and Tim's team will help you out."
Tags: Artery RecordingsTim LambesisAustrian Death Machine

dude do you even bree?

This is what happens when people support shity music, labels, and individuals. LOL at the gays that got jacked.

The grammar in this article is atrocious.

I Can Hire Someone to Kill My Wife To This!

What?!?! The guy who confessed to a murder for hire plot against his wife is sketchy?!?!?! Any body who still wants this album is a tool and the Artery "Foundation" douchebag sound like a real winner too. "Tim's a psychopath, but he lied about a charity and we think that's neat. Wish there was more keyboard in the album though". Hopefully some of these people get hit by a bus.

"aren't their yet" "check in the mail"

Glad I torrented this shit for free now

"dude do you even bree?"

There are so many spelling errors in the Artery statement I can barely believe it came from a legit organization. Bush league bros are stoked.

How much does it REALLY cost to book your favorite band for a show?
Most Precious Blood says Thy Art Is Murder 'ripped off' album cover
true stories? Or urban legends?
Trapped Under Ice vocalist endures rough 10 seconds at show
Tera Melos frontman Nick Reinhart is a guitar pedalboard wizard