Sworn Out t-shirts have Sworn In swearing

So some clothing outfit called Overthrown recently added a "Sworn Out" shirt to their merch site, claiming they were for the parody band, Sworn Out. You can check it out below: 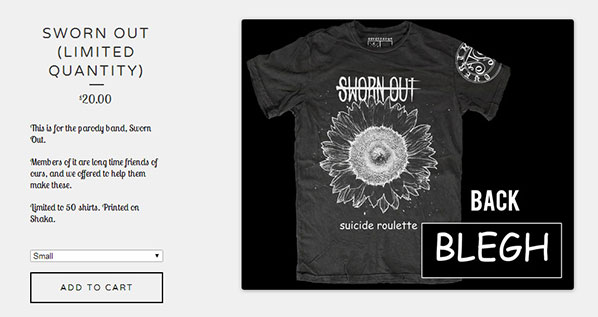 @tylerdennen is ranting about Sworn Out. ???? take a joke lol pic.twitter.com/vG4LnuUzrc


@AustinFry22 I did until they printed t shirts. using our name and image to make money isn't cool


yo I get making fun of my band cause you don't like us. But printing shirts to make money by using that bands name and image is frowned upon

Optimism is a venereal disease.

Tyler can eat a weiner

i would feel a little privileged and proud to know that my band has made it far enough to even have a parody band.

I know this get thrown around a lot on this site, but this band sucks. Seriously. Garbage.

they're mad for somebody stealing their name and making money off it when they stole a name from a band and made money off it. what goes around comes around.

"It's gonna suck for you when I tell my dad!"

So a shit band is coming out with merch that a shit band already has?????? Shit bands just keep getting shittier and shittier.

Didn't this brand just get finished from stealing a bunch of money from people through IndieGoGo?

Diabetes is a fcking disease. You skip the think and go straight to the coma because you forgot to bring your insulin on tour.

The shirts are limited to 50. Those guys sure are going to profit hard off this. What gayz.

Too bad this fake Sworn In stole their name from the Sworn In on Bridge9 in the early 2000s... So basically, he has no grounds to stand on in complaining about this Sworn Out parody shirt. http://www .youtube.com /watch?v=EKUtPrGzJUE

Maybe bridge 9 should sue the band for infringement.

Tyler the whiny rich kid in you is showing.

YO YOU LITERALLY STOLE YOUR NAME FROM ANOTHER HARDCORE BAND WTF ARE YOU TALKING ABOUT YOU GUYS SUCK.

Someone get Jessi Slaughter's dad to defend Tyler. CONSEQUENCES WILL NEVER BE THE SAME!

look at the irony in all of this,a hardcore band,pissing and whining about somebody ripping them off,but they more than likely are playing a "dated" style of hardcore... build a bridge and get the fck over all of it!!!!

who the fck cares if they took a name that was used by a band, which sucked dck and broke up? sworn in is now their name, and sworn out is blatantly copying/ making fun of it. Image is everything and that crap can hurt a band. they obviously have enough haters so they probably want to end that shit. anyway, regardless of anyone saying "they suck," they are super famous and make a shit ton of money, so i'm pretty sure they have enough fans to not care.