Chuck Billy and Testament pissed off some people in Indonesia

In summary, circumstances led to Testament's set-time being pushed back an hour, which apparently angered Testament frontman Chuck Billy, who started unplugging the instrument cables of Indonesian metal stars, Power Metal, who were on stage performing. This angered the crowd, which apparently sat down in protest during Testament's subsequent set, which in turn further exacerbated Billy's lousy mood. Testament unhappily exited the stage and Power Metal reportedly returned, to the delight of the crowd.

You can read a detailed account here. It sounds all rather pedestrian to me, but it's apparently a big deal in Indonesia, where residents continue to bombard Testament's Facebook page to complain (see below). 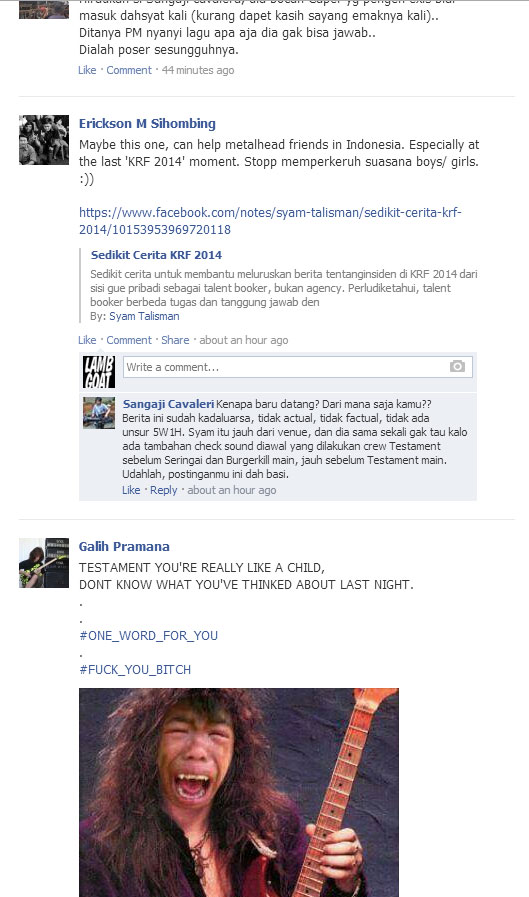 Right on cue, Testament has now issued a statement on the matter:


As Testament returns from our first trip to Indonesia, a country we've looked forward to visiting for many years, it is with deep disappointment that our performance didn't turn out as planned. While our experience in this great land had been nothing but wonderful from the time our first plane first touched down – from the warm hospitality of our fans, local staff and others to whom we are grateful, to being honored by the mayor and the press shortly before appearing in front of 50,000 fans at Kukar Rockin' Fest 2014, things went awry only at the moment we were scheduled to hit the stage.

That's when the support act directly before us began their set. Normally this would not be a big issue – rock'n'roll shows don't always run on time as everyone knows – but in this case, there was a serious problem: we had a flight to catch in just a few hours. The flight was from Balikpapan Airport, several hours from Tengarrong (the location of the concert) which required several hours driving over rugged terrain. Making matters worse, several pieces of luggage had never arrived and these needed to picked up in Jakarta before we could board our connecting flights. Missing our connecting flights in Jarkata would have caused the entire band and crew to miss our further connecting flights home (after nearly a month on tour) followed by a trip to Mexico City's Hell Heaven Fest within three days of arrival back to the US.

So in order to play our full set and be sure we made this flight, an attempt was made to play our set on time, with the support act following us. The local stage managers, while well intentioned, did not seem to grasp the urgency of the situation as the support act (Power Metal) continued to play and we watched our set time disappearing. When our singer, Chuck Billy, came out and attempted to address the support band and audience, he was not understood. Regretfully, this led to a minor confrontation with the support act who only stopped playing once their gear was finally turned off by our crew (for which they responded by dousing water on one of our own amplifiers). While this situation was interpreted as the headliner being disrespectful to the local band, that was not the intention.

Not helping these miscommunications was the language barrier for which no one can be blamed – our concern wasn't understood and nobody in our entourage speaks Indonesian. We were also short of our full crew, some of whom hadn't been available when this show was added to our tour at the last minute. Regardless, the result was a crowd that was visibly unhappy during our set and for that we accept responsibility.

To our Kukar Rockin' Fest audience: We deeply apologize for any hurt that was caused. While we would have appreciated the support act being more accommodating, we nonetheless apologize to them as well and meant no disrespect. In hindsight, it might have been a better decision to just let them continue and cut much of our own set. But in the heat of the moment, a judgment call was made that backfired. We regret this turn of events, which does not represent what Testament is all about, nor what we'd travelled all that way for Testament deeply appreciates the fans of Indonesia and hopes they find it within their hearts to understand what has happened and forgive. We truly hope to return to this region one day amidst deeper understanding and better circumstances.

What the fck is that thing???

testament does not need to take that kind of nonsense from a shitheeled Indonesian band a bunch of uneducated, unhygienic and generally bad audience. So... fck you Indonesia, fck you.

I Just Check Out Testament Whole Catalog On You Tube From 1983-present.Holy Crap They Must Be One The Most Underated Band Ever.Sad Days in Music These Days.Alex Skolnick Shred Kirk Hammett All The Way.No More Lamb Of God,Children Of Bodom Please.They Dont Make Albums Like These Anymore.Anyway Does Indonesia Have Airplanes Or Toilet?Testament Will beat Idonesia,And Many Shiity Metal Bands In Pieces.Talk Thrash To One Of Metal Legends.

How much does it REALLY cost to book your favorite band for a show?
Earnings & attendance for A Day To Remember, The All Stars Tour, Wovenwar, more
earnings & attendance for Ozzy, Faith No More, Ministry, Coal Chamber, more
Against Me! singer has kind words for supposed Slipknot drummer Jay Weinberg
Cynic, ex-Death members openly discuss their sexuality for the first time