has Emmure ditched the song title "Bring A Gun To School"?

Pretty much every thing Emmure does is accompanied by some level of drama. However, there was even more than usual when the band announced their forthcoming album, Eternal Enemies, and its accompanying track list. Most of the outrage was centered around the song titled "Bring A Gun To School." Various music media outlets assailed both the band and their label Victory Records for allowing said song title to see the light of day. Even one of Emmure's original members stepped out of the shadows to blast the band and frontman Frankie Palmeri. Of course nobody had actually seen the lyrics to the track, so for all we know it could be a song protesting violence. Doubtful, but who knows?

Anyway, there's a good chance that the song title has been dumped, as evidenced by Victory's pre-order page for Eternal Enemies, which now lists the opening track as "(Untitled)." 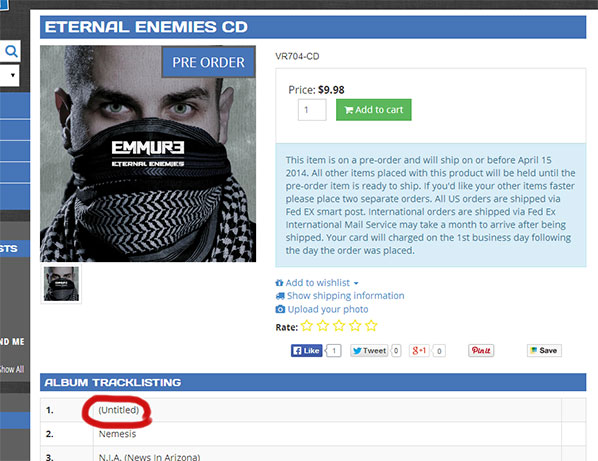 Who cares. I would have left it as is.

Who gives a fck? Is that enough discuss for ya?

I don't care so fcking much

john denver wrote rocky mountain high and he was full of s#!t, so who gives a f@<k about what emmure says

^ How very topical. You sir, must be an expert in political satire.

How much does it REALLY cost to book your favorite band for a show?
Video: soul dancing to Meshuggah
Motorhead frontman Lemmy worth less than $650,000 at the time of his death
guy urinates into his own mouth at Trash Talk show
Adam D. is loaded! You believe those celebrity net worth websites, right?!