In This Moment rides "Whore" to Atlantic Records 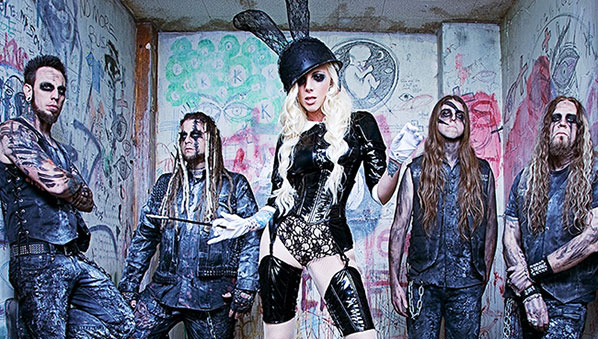 My apologies for that headline. Anyway, Southern California (via New York) alternative/rock metalcore band In This Moment has signed with Atlantic Records. The band previously released four albums with Century Media Records, the last of which debuted at #15 on the Billboard 200 chart.

According to Billboard, the band will enter the studio on February 23rd with producer Kevin Churko.

Anyway, I guess that whole "Whore" thing worked out for singer Maria Brink and company. I don't like their music (if you've never heard them, the photo above should be self-explanatory), but congrats, I guess. The last band I remember leaving Century Media for Atlantic was Shadows Fall, and that relationship lasted for one album; we'll see what happens.
Tags: Atlantic RecordingsMaria BrinkIn This Moment

Awful band. Would be willing to see some nudes of the singer though

That is the most hilarious band pic I've ever seen. Knowing they wasted hours doing makeup for the shoot makes me feel better about jerking off in my room whilst listening to metalcore records from 2002.

I banged the singer once. She cried after. True story.

i was about to fck the singer after one their shows, i smoked her out and she got me in the show (i just happened to be a show down the street) but she just cried, it was really weird. she has nice t-ts though

poison the well lasted one album on atlantic too

How much does it REALLY cost to book your favorite band for a show?
Tyler, The Creator calls Bring Me The Horizon's Oliver Sykes a "Tumblr F*g F*ck"
true stories? Or urban legends?
Hoods frontman really wants to fight Victory Records owner Tony Brummel
Motorhead frontman Lemmy worth less than $650,000 at the time of his death