Rapper, producer, and entrepreneur Tyler, the Creator has made it clear that he's not a fan of Drop Dead Clothing, the new clothing line from Bring Me The Horizon vocalist Oliver Sykes.

It seems that one of Drop Dead's new shirt designs borrowed heavily from lyrics to Tyler's 2011 song, "Radicals." The lyrics in question are "kill people burn shit fuck school." You can see the shirt below.

Tyler had the following (eloquent) reaction to the shirt: 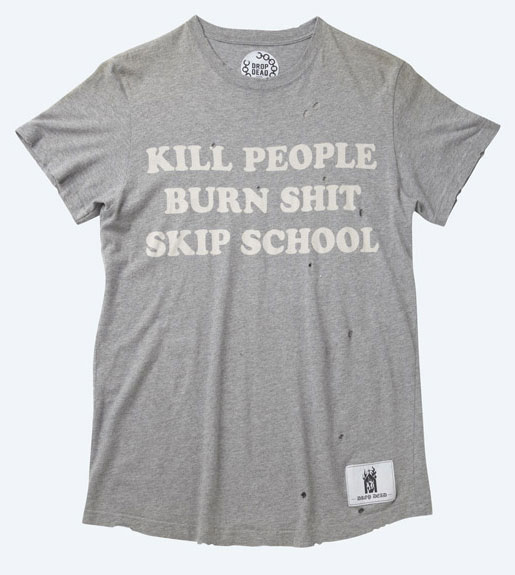 UPDATE 1: Oli Sykes has now offered up a response to Tyler's complaint, in addition to accusations that he's stolen from other artists as well. First, he retweeted Tyler's original Tweet, then posted the following:


"I just thought skip school had more charm to it. You could try watchdogs but I think they have bigger fish to fry...

"Who gives a shit. Nothing of me is original. I am the combined effort of everyone I've ever known & everything I have ever seen."


UPDATE 2: We're not exactly sure why, but Falling in Reverse frontman Ronnie Radke has weighed in on the matter:

Certain people that steal others art and music and designs WILL get exposed. You can't just jack peoples shit dude. You know who you are

why does this shirt look like it was dug out of a dumpster.

Because he coined that phrase.. Idiot.

Not going to lie, I'm with Tyler on this one. Next, Tyler will have merch saying "I've got a secret, it's at the tip of my tongue, it's on the back of my lungs" and Oli will supposedly be ok with it?

By the way, it's not "Tumblr gay fck" it's Tumblr gay. "fck him." is the next sentence.

ah, good point. If only he had used puncuation!

if only you knew how to read and write

This gay boy is prolly so upset and sad because most likely he obviously loved him. What a fcking retarded and dimwitted thing to put on a shirt. Really... so radical bro. Good message to send to 16 year scene kids.

you idiots that say,"I'm not going to lie" are actually stating that every bullshit crybaby line of garbage that exits your pie-hole is a lie. No wonder you cant find a job other than as a janitor at your Dad's Amway scam office.

Whether you believe that Oli was wrong or not for 'taking lyrics' it was not okay for Tyler, The Creator to say what he said to Oli. If he had a problem, he could have confronted Oli like a man and not have been an asswipe about it.

I'm sure anyone would be mad if they wrote a song (a successful one at that) and someone else decided to jock it on some cookie-cutter, piece of shit fabric. Tyler reacts this way with just about everything so that is not much of a surprise. Tyler overreacts. Oliver Sykes should know better. And I could honestly care less. This kind of news is pointless.

"you idiots that say,"I'm not going to lie" are actually stating that every bullshit crybaby line of garbage that exits your pie-hole is a lie. No wonder you cant find a job other than as a janitor at your Dad's Amway scam office." THAT wasn't meant to be direct what so ever.

I'm going to buy this and wear it to a golf wang show. fck Tyler the creator

He Did the same with Suck a fck and Frans didn't bitch about how similar it was. Tyler, you're fcking famous already. don't be a Kanye

It didn't take a stupid t-shirt for me to think Oliver Sykes was a fckin' goof.

I find this funny considering Tyler the Creater puts images of cats with upside down crosses on his merch and I'm pretty sure he stole that idea from "some tumblr f*g fck". Pot calling the kettle black, nothing to see here.

"Whether you believe that Oli was wrong or not for 'taking lyrics' it was not okay for Tyler, The Creator to say what he said to Oli." Looks like someone got a little butthurt and came out of the Hot Topic dressing room to defend his idol. fck Oliver Sykes, and fck this shirt. Good thing Tyler isn't Lars Ulrich or Mr. Sykes would be getting sued over the lyrics, especially considering they're in the font OF always uses too.

Regardless of who is right and who is wrong, we can all agreed that if you are on tumblr, you are indeed a gay.

I mean its pretty clear here that Oliver took lyrics that Tyler is ACTUALLY known for and tried to pawn it off as if he came up with it by only changing one word. No it is not copyright, but its still pretty lame of Oliver.

walking haircut in shitty generic girljeans band does something. mediocre rapper whose hipster crowd is slowly disappearing gets upset. frrrrrrrt

Everybody bitching at lambogat saying this is a stupid story, quit being a gay. You not only came in here and read the story, but you also commented. Stop being an attention whore.

Hilarious that people think the people mentioned in this article are relevant.

Maybe oliver did use a section of his lyrics, but I personally just think tyler is mad he didn't get to put it on a shirt first. People use the same lyrics all the time. You search a line and you'll get an array of songs, artists, and genres. Tyler just needs to calm his shit. I was a fan but now...no respect.

Tyler better watch his shit.Hell someone buy that Wakai kokujin a ticket to BMTH`s next concert and let them play PFP and put Tyler dead center of a Pit or WOD.then see if he talks his shit

Tyler the creator is a sage and a fckin retard

I love Oliver's line of clothing, it honestly is the greatest, I think "tyler the creator" is jealous because he didn't come up with the idea

How much does it REALLY cost to book your favorite band for a show?
true stories? Or urban legends?
Motorhead frontman Lemmy worth less than $650,000 at the time of his death
Christian Bale learned double-bass drums by listening to Pantera, Mastodon
Melvins' Buzz Osbourne thinks Rob Zombie is an asshole