Lee McKinney of Born of Osiris is selling his guitar tone. Your reaction?

This past weekend I happened to notice the following post from Born of Osiris guitarist Lee McKinney on the band's official Facebook page:

"Hey everyone, Lee here. I've put my signature Axe Fx II rhythm tone that I used on Tomorrow We Die Alive for sale on the Joey Sturgis tone store. We will also be putting up the Discovery rhythm/lead tones in the near future. Head on over and check it out, enjoy!" 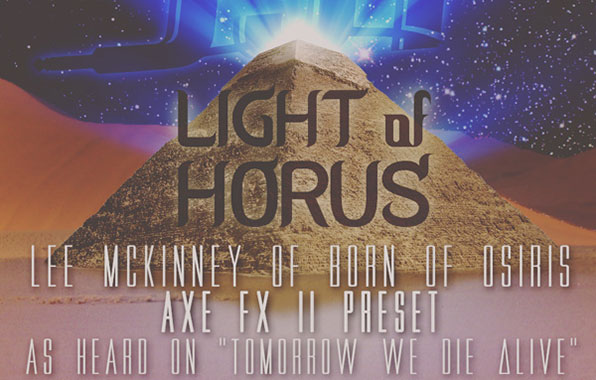 If this means nothing to you, let me break it down. McKinney, and many other musicians, often use the Fractal Audio Axe-Fx electric guitar preamplifier/effects processor to create their guitar tones. In particular, the device has gained traction in the metal/hard rock world, where it's seen employment by such notable guitarists as Steve vai, John Petrucci (Dream Theater), Alex Lifeson (Rush), Dave Mustaine, Stephen Carpenter (Deftones), Fredrik Thordendal (Meshuggah), and Misha Mansoor (Periphery). So, potentially, you could obtain presets from some of your favorite guitarists and sound (theoretically, of course) just like them.

McKinney, in conjunction with producer Joey Sturgis, is selling his "signature tone" for $20 and not surprisingly, reaction amongst visitors to the BOO Facebook page has been mixed. Here are some select comments:


"Presets? For sale? Will you be putting up diagrams of your signal processing chain for sale as well? lol"


"Wow. You guys are whining like you are forced to buy it. Chill out. If it sells and people like it, what's the problem?"


"You guys don't realize this is mainly marketing towards producers/engineers and musicians/fans who want the tone. Joey Sturgis and the guys in BOO probably thought it was a good marketing idea since people will benefit from it and so could they."


"I'm sorry but there's just no way to justify selling an Axe-Fx patch for $20, especially when there's a million other musicians putting their's on axechange for free."

All of these comments are perfectly valid. Personally, I'm as conflicted as BOO's fans are. I really want to know where are readers stand on the matter. Please help me out and vote below.

Oh the days of going to each others' house and dialing amp tones until one is good ... or even sometimes just SEEING your favorite artists' amp tones dialed in back stage (if you had to get an idea) ... but selling them or buying them?

Well his guitar tone is atrocious. So who would want to buy it anyway? I mean I could be wrong, If Cameron at Chango studios can make a drum set sound nothing like a drum set and people buy his samples i suppose people would want a born of osiris tone but it seems pretty ridiculous.

as if most metal produced after 2008 didn't already sound the same.

just another cash grab. moving along...

I really don't care, most likely it will wind up a torrent site for free 3 days after. While I would never pay 20 bucks for his tone because I have always disliked their tone (even tho i enjoyed some of their music.) I can see the idea behind this, people like slash have special versions of Amplitube based around his amp set ups and I don't see people going all crazy about that (not comparing BOO to slash but just the idea in general)

all the djent bands sell riffs to each other

devin townsend put all of his tones on metal injection for free.

Devin Townsend, Deftones, The Faceless, Periphery and many other high profile artists release their patches at no cost. While I'm never going to tell an artist how to make a living, they should really check the market in which they are entering. If your peers and superiors are doing it for free...then surely you should follow suit?

Plus it's just the rhythm tone. Any BOO fan with an Axe Fx 2 would already have the stem files they released, and would just use the Match-EQ functionality of the Axe FX 2 to copy the stem file anyway?

isnt the piece of equipment you need to even work this tone on like 2,000 dollars? if you can afford 2 grand for a fckin guitar accessory then you can afford 20 bucks wtf

fiscal darwinism, If it sells then fck it, right? You mongoloids would do the same.

Can Lee sell something that technically belongs to Sumerian?

stop whining little bitches, you guys complain like youre gonna pay for it, you probably dont even pay $15 for the CDS and just download it out of your gaygy torrent sites.

These are also the guys whom were selling endorser gear while under contract, while getting accused of robbing a band member, etc etc etc. Get with it - they are probably broke.

I twisted some knobs and called it intellectual property.

Playing your guitar through a computer processor is bullshit anyway. People are surprised that this band doesn't have a punk rock ethic or something? This is worthy of debate somehow?

Disclaimer: ability to play follow the signs not included

"Can Lee sell something that technically belongs to Sumerian?" He might not be getting all the money. Sumerian might take most of it. Just because it says "he" is selling it doesn't mean Sumerian isn't taking any of the money. In fact, I bet it was their idea and they're probably taking MOST of the money and giving him just a small percentage.

I really want to know where are readers

Drummers/Producers sell their kit set ups/tone as programmable patches for samples and or program layouts. Whats the difference? Guitar tone is infinitely layered and processed. It makes perfect sense that a very recognizable guitar player would offer up his "tone" for people to jam with. Dig it.

It's funny to see all of these people tell him what he can and can't do, especially when he already answers to the whim of everyone while making jack shit for being a musician. Awesome, free market that shit up, all for him getting more money to make more music, I don't know why others are so opposed to that.

Lol id rather pay the 20 to get a sound thats like the one that the guitarist in one of my favorite bands has. The hours ive spent tweaking all the settings and effects on my RP360 in an attempt to get the sound that im looking for + the fact that i dont even know what specifically i would need to change or adjust to even get going in the right direction towards the sound that im looking for...i mean yeah id much rather just pay the 20 bucks for something that i at least know is more suitable for the sound that i like as opposed to whatever im working with right now. Even if i got it and was disappointed for whatever reason its not like im gonna lose sleep over wasting 20 bucks. People probably just talkin shit cuz theyve never had someone willing to pay them money for their sound lol

How much does it REALLY cost to book your favorite band for a show?
For Today frontman offers non-apology to LBGT community, then deletes it
Adam D. is loaded! You believe those celebrity net worth websites, right?!
King 810 brings guns to a guitar fight
Terror frontman Scott Vogel calls The Ghost Inside 'bullshit band'