Wed, February 18, 2009 8:38 PM PT
Forget about tonight's show, for tonight was about the ghost hunt. The venue we played is this creepy old Eagle's club building that is supposed to be haunted. There are tons of nooks and crannies and secret passages in this place and it is awesome to explore. After the show as Brandon and I were heading out to the van, we ran into Cynic right at the start of a guided tour of the place, so we tagged along. Before I get started, let's review some information on the place.

Built in 1926, The Rave (Eagle's Ballroom/Club) was originally an athletic club/social gathering spot that was outfitted with a restaurant, bowling alley, swimming pool and boxing ring. The pool now abandoned and drained, lies behind locked doors in the basement. There was at least one confirmed drowning victim that may still haunt the pool area. On Saturday, September 10th, 1927, a 17 year old male died while swimming. It was unclear at the time whether he accidentally drowned or suffered a heart attack. His body was discovered soon after by another swimmer. We are still trying to confirm any other deaths, especially that of children, that may have occurred in the building. A past employee who occasionally worked the coat check in the basement reported hearing a girl's voice coming from the catacomb-like halls. When he went to look, he found no one, and a cold breeze brushed against his face. Other activity includes a strong smell of bleach or chlorine coming from the basement, seeing "shadow people", objects being thrown from the roof when no one is there and no wind (or birds or squirrels) are present to cause it, and extreme cold spots. Most activity is observed when the building is closed and almost empty.

We walked all around this place, and it's huge. This place is built into a hill, so you don't know how big it really is, just like at the end of From Dusk 'til Dawn. The guide took us up to a higher floor (about 6 or 7 stories up) that had a view of the grand ballroom, and there was a huge event going on that we had no idea about even though we had been in the building all day and night. A mariachi band was playing and hundreds of people in there dancing and partying. Call me ignorant, but I didn't know that there was a large Latino community in Milwaukee. Moving on, he took us around the upper perimeter of the ballroom, then up a tiny unlit spiral staircase that led us to the roof. The roof granted us a view of the Ambassador Hotel, infamous for being Jeffrey Dahmer's stomping grounds. It was there where he picked up a dude at the local bar, took him back to the hotel, chopped him up, and stuffed him in a suitcase.

It was in the next room that we observed the first of the alleged paranormal activity. We were standing in a room with no breeze or wind passing through, but a door was opening and closing inexplicably. I walked over to the door, and it stopped moving. When I turned my back to it, much like in Super Mario, the door starting moving again and was forcibly pushing against me. That sounds stupid on paper, but it was kind of creepy being there.

Cynic's drum tech is a ghost hunting buff, so he knew what to look for and says he knows the best method to catch them on camera. We were taken into the abandoned pool area and into an access tunnel that had windows looking into the deep end of the pool, part of the boiler room or something. The tunnel went around the entire perimeter of the pool, but only one corridor was lit. The guide said he doesn't go down that way, and that was a sign for the dude to get his camera out. He said that the best way to get a picture of a ghost is to shoot over your shoulder as you walk out of a room, and that he's captured ghosts on camera before using this method. He snapped two shots within a second of each other, and here they are. 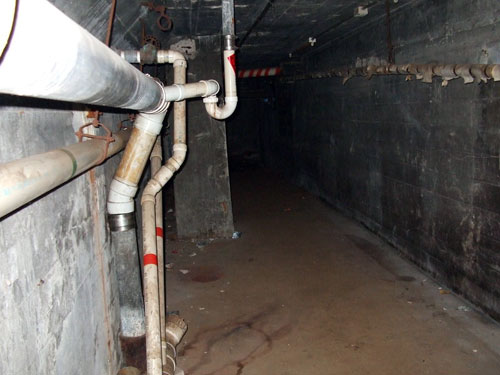 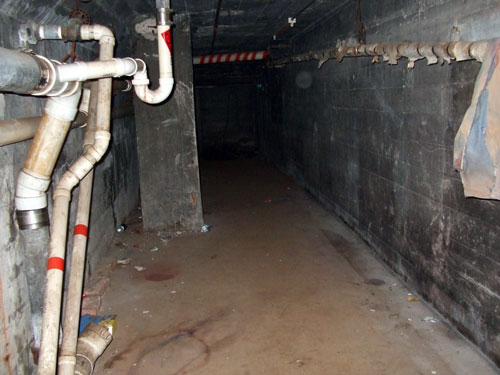 He was very excited how this picture came out. I'm not sure what to make of it, but why would a glowing orb be in one photo and not in the other? It's obviously not a smudge on the lens since it isn't on the picture taken a second before. It can't be a glare because there weren't any lights on in the corridor. I was caught up in it way more at the time it happened, looking at the picture on the LCD of the camera, but now I'm not so sure. Interesting nonetheless. He got more pictures of floating glowing orbs, but this example is the most convincing.

could be a speck of dust that floated in.....the pictures aren't taken the EXACT same way, if you look at them closely

it could be a 4th dimensional reptilian

Definitely an infernal Saurian. Most likely tall, strange and blood-thirsty.

Some metal band drummer says, "I'm a ghost hunter man, I got this."

A pretty good way to get ghost pictures is to tilt the camera on it's side. Make sure the wrist strap dangles in front of the lens. I've seen some tall, ominous dark figures using this method.

It can't be a glare, because the camera doesn't have flash. That's why when he took two pictures in a second you can't see it in the first one, but definitely in the second!

You might be from Cali if.....you use the term "latino". P.S., leave it to a drum tech to be a fckin' ghost hunter. Much love Derek, but can we get THAT dude to a tour blog next time? I want to bask in the truths/yarns he might possess.

been to a million shows at the rave, never heard anything about it being haunted lol. interesting though.

the rave? I'm surprised you weren't attacked by the security guards that haunt that place

If you look close, the glowing orb is screaming.

Sir, what you have here is a Class 4, non-roaming repeater..a real nasty one too. Yo, the Towson show was t-ts guys!

Tour is over already?

The "glowing orb" is a particle of dust reflecting the light from the flash.

Since im highly annoyed by all this "ghost hunting" nonsense here goes: Its already been scientifically proven ghosts dont exist. The energy created by the human mind leaves an "imprint" on space time (einstein proved this) and certain people can perceive that due to extra sensory perception within their own mind. Hence, why there are psychics who can perceive past events by picking up on the energy left behind by so called ghosts, solving crimes and wowing us by telling us about the hat gram

NIce article. Really nice! But i think that you could give some more info on a couple of points. However, keep on developing your great site! :)

can someone please tell me the 17 year olds name / he died on my birthday (not includeing the year) and i cant stop thinking about this everytime i go to the rave with my friends its nearly getting hard to enjoy the music when all i can think about is him and how he died and how lonely he must be . :( i just want to at least know his name.i know i know its stupid . please though .

How much does it REALLY cost to book your favorite band for a show?
Machine Head frontman talks racism and calls out All That Remains singer
true stories? Or urban legends?
RIP, John Dudeck (Very Distro)
Is Suicide Silence about to announce a new singer? The new guy might be...