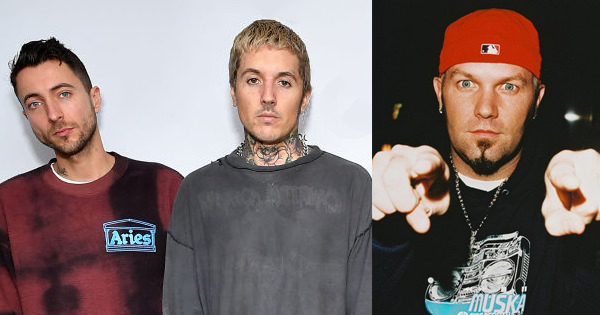 Yesterday (October 21), Bring Me The Horizon frontman Oli Sykes appeared on BBC Radio 1 'Rock Show with Daniel P. Carter' to discuss the band's forthcoming album, Amo, among other things. During the discussion, Sykes revealed that last year he and bandmate Jordan Fish were hired to help write material for the next Limp Bizkit album, which has yet to surface. For better or for worse, the sessions were not productive, according to Sykes:
"Last year, me and Jordan went and worked with Fred Durst on a Limp Bizkit album. It just didn't work out to be honest. He just didn't show up most of the time. Lovely guy, but I don't think he was ready to make an album. I think he was pushed into it a bit, like, his managers and people said 'these are the guys you want to work with.' So we gave him all these ideas and I mean it was just bad from day one to be honest."
Interestingly, Sykes says that the band's newly-debuted song, "Wonderful Life," originated from those very sessions:
"It's one of them things, looking back, where it wasn't meant to be. One good thing came out of it: me and Jordan wrote this riff and I one day decided the tempo and key matched almost perfectly with the song. So we de-Bizkit'd it a bit, and it ended up sounding pretty sick."
[via ThePRP]

Poison The Well have reconvened to rehearse
Fenix TX bassist Adam Lewis has been diagnosed with pancreatic cancer. Help out if you can.
some new Every Time I Die is imminent
Opeth released this album 10 years ago today
we've started posting a few Furnace Fest video clips in our Instagram stories
more news tidbits