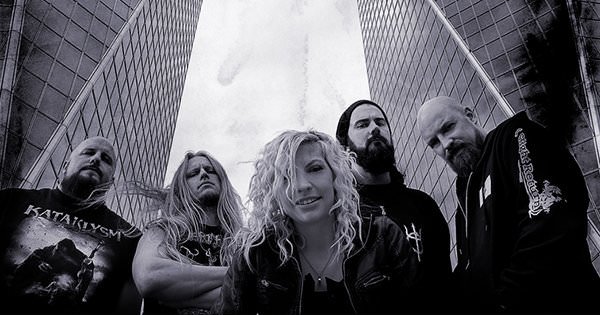 Into Eternity is streaming the second single from their upcoming album, The Sirens, which is due out on October 26. Guitarist Tim Roth comments: "'Sandstorm' was the second song written for The Sirens. Most of the other tracks are long epics, but 'Sandstorm' is a short, action packed song that holds plenty of firepower. Amanda did a spectacular job on the vocal melody and even though this song has a nice groove, there are still a lot of blast beats, guitar harmonies, melodic bass playing and shredding solos to be heard. This track also features Rob Doherty (low Growls), Stu Block as guest vocalists as well as Justin Bender on the outro guitar solo. The song's lyrics were inspired on May 2, 2011 after the USA shot and killed Osama Bin Laden during a covert mission." "Sandstorm" can be heard now via Decibel.

Decapitated has issued a new music video.
these albums were all released 10 years ago today
video: Knocked Loose full set from This Is Hardcore 2018
this landmark album was released 30 years ago today
New York deathcore band Refuge release video for new track featuring vocalist of I AM
more news tidbits