Burnt By The Sun

ACTIVE
Based in
N/A
Formed in
N/A
Genres:
N/A
Socials:

Formed in late-1999 by drummer Dave Witte (Discordance Axis, Human Remains, Black Army Jacket) and guitarist John Adubato (Time's Up), Burnt By The Sun materialized when the pair began writing material and practicing together in New Jersey. Soon after, vocalist Mike Olender (ex-Endeavor, Nora, Try. Fail. Try) and bassist Ted Patterson (Human Remains) would join the duo, followed by second guitarist Paul Miller. According to Witte, "We were tired of being let down by buying records that failed to deliver what they promised so we set out create something to our standards that we would want to hear from a band." (www.relapse.com) The quintet quickly wrote new material for the band and made its live debut at the 2000 March Metal Meltdown. From there, Burnt by the Sun would begin recording tracks, three of which showed up on a split CDEP for Ferret Music, with Jersey's grindcore upstarts Luddite Clone. After months of practicing, playing shows, and participating in festivals (Loud Az F*ck, Milwaukee Metal Fest to name a few), the band would finally record its debut self-titled CDEP for Relapse Records. Although the band would experience a personnel switch (enter Chris Rascio, formerly of Time's Up, on second guitar), Burnt by the Sun would continue to play numerous shows for its growing fan base. The band's debut full-length effort, 'Soundtrack to the Personal Revolution,' is set for release in January of 2002 on Relapse. A combination of grind, hardcore, and metal, Burnt by the Sun is able to write intricate music that is chaotic, yet controlled, thanks to the musical prowess of both guitarists and rhythm section. Unlike many if its label-mates, the band's lyrical content focuses on life and different perspectives, with explanations for each song. read less

Burnt By The Sun - Heart of Darkness 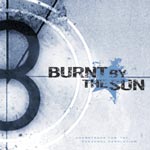 Burnt By The Sun - Soundtrack to the Personal Revolution