With Honor Heart Means Everything 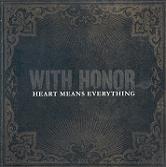 01. Intro 02. Rethink, Return 03. Third Generation 04. More Than Heroes 05. All Hope Aside 06. With The Wind 07. Milwaukee 08. Stolen Glances 09. Perfect Stances 10. Textbook Case 11. When Will We Learn
2004 Stillborn Records
Our score 7
by Cory
2/27/2004
As hardcore gains more and more mainstream appeal, bands are latching on to the sounds of bands that have gained some measure of success. With Honor combines the style of throwback "old school" hardcore with slick production, frequent breakdowns, occassional metalcore flourishes and a notable pedigree. Formed in 2002 by former members of In Pieces and Hamartia, this band was rather quickly signed by Jamey Jasta's Stillborn Records. If there's any man that knows about how to package and market hardcore, it's Jamey, and With Honor is no exception. The group has created the sort of palatable and idealized hardcore that very accurately sums up the last few years of the genre: hardcore song structures + metal riffing + clever packaging + street cred and image = success. While With Honor boldly states that "heart means everything," this sentiment doesn't sit well with me. While an excess of furious emotion is generally characteristic of hardcore, "heart" is not the first thing that I hear when listening to this record. I'm definitely not saying that the record is devoid of it entirely, just that it certainly doesn't seem to be the centerpiece around which this record is built. There are some impassioned songs and intense delivery, but there are also disturbingly over-produced guitars and drums. The "spirit of hardcore" that With Honor claims to have feels like it got trampled during the recording process. It is not fair, nor does it make sense, to expect a record to sound like shit, but when hardcore records start sounding like In Flames records, there is something strange going on. Kurt Ballou, whose style usually captures the raw power of a band, does little to recreate any inkling of With Honor's apparent devotion to "hardcore." The problem that I keep having is that although I find this record to be rather predictable and even formulaic at times, I still find myself listening to it and enjoying it to some degree. It is definitely not boring or untalented. Songs like "Rethink, Return" and "Milwaukee" are catchy and well put together. There are enough clever riffs and drum fills throughout the record to keep me listening from one to the next. My only real complaint musically is the inclusion of yet another pointless instrumental track. I honestly couldn't tell the difference between this instrumental and the one on any other hardcore record. Why bands continue to do this is beyond me, but if you're into instrumentals, With Honor has got one. This is the kind of record that tries to pull the wool over the listener's eyes, trying to pass off musical proficiency and complex song structures as the "heart" of hardcore, but at the end of every listen, I feel more satisfied than cheated. I don't doubt that these guys love hardcore, but this record doesn't feel like the testament to that love that it wants to be. It is, however, evidence of the talent of this band and their creative ability. Bottom Line: Maybe With Honor isn't pushing the envelope or opening my eyes, but they are playing quality songs with immense talent, which is more than can be said for a lot of bands. If the album's music is truly meant to represent the album's title, the band may have fallen short: "heart" doesn't seem to mean everything, but it definitely counts for something. All hardcore posturing aside, the music and lyrics of With Honor's debut full-length are excellent. If you are down with hardcore that doesn't mind letting its intensity occassionally take a back seat to production, "Heart Means Everything" could be your new favorite record.

First post! Why I am the the first and only post to this album is beyond me, but this record is f*cking incredible and everyone into the so called "hxc" scene could learn a thing or two from these guys. Truly passionate record.

ive seen them live a couple times and they are funs hows with so much passion in the music. nyhc &lt;3