You don’t compare yourself to Anaal Nathrakh and not expect some arousal among fans of that band and extreme metal as a whole. This is exactly what Greece’s Wothrosch have done in preparing the metal world for Odium, their debut album, and it’s not completely unwarranted PR talk. This is a band who have less than two hundred followers on Instagram and half that on Facebook - they’re new new, just what we like to see around here, bold opening statements or not. 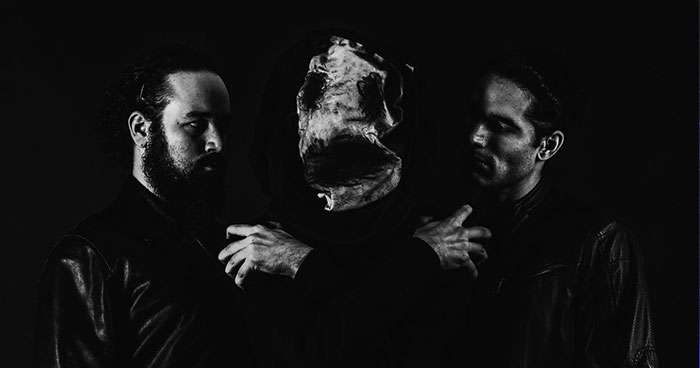 Building up to this moment with the release of two singles last year, Wothrosch have already managed to make a strong first impression, stocking the hallowed halls of a black metal-styled bulwark with the armaments fit for a death metal army to shoot a salvo upon the masses. Warlike blast beats, vivisecting guitar work, brooding atmosphere, and feral vocals belched up from hell all combine to make Odium worth discussing and help usher in what should be a heavy-ass year of releases.

It all starts with the cover art, a mighty steed carrying a distinct aura of power, visually resembling something like liquid magma spat from a volcano. The black and white coloring makes it all the more striking. It’s a representation of regal strength, something Wothrosch have in abundance with their music. The tastefully angular, brutalist design of the band’s logo looms in the top-right corner, an omen prophesying the crude sharpness of the music.

It’s not all ripping speedruns through songs either - these are hefty motherfuckers, most running well past the six-minute mark and beyond. Wothrosch take their time building soundscapes that are as foreboding as they are entertaining on a raw level. Opener “Child” is heavily indebted to the distinct sort of melodies you find when black and death metal bang together, calling forth that Anaal Nathrakh comparison (though more subdued because not much can beat that band’s ferocity) or even Behemoth’s earlier work - you know, when they were wholly worth being fans of. The drums are just relentless, rarely letting up for the track to breathe and when they do, you can always count on them bearing down on you shortly after with the weight of a sun… a black sun.

“Tumor”, one of the album’s singles, continues this trend with an ebb-and-flow structure that melds chaos to order. Odium never flies off the rails, even at its most complex, which ensures you’re never grasping for something to hold onto. If the melody breaks, then the explosive rhythm will guide your way. It’s a kind consideration for a band of this caliber and age to make - most would fumble this with their first (or second) release. Next, “Disease” reins things in to make the track open up more, almost channeling a sludgier approach. Slow and low is the modality here (and with other tracks like “Sinner” or “Odium”) but the ferocity is never abandoned. It’s moments like this that make for awesome creative foils to the heavier material and foster a diversity that can be rare on a debut album like this.

By the time Odium ends, it’s hard not to be on Wothrosch’s side. New bands are pressured to impress, showing what they have to offer upfront while leaving room for progression in future work. This is exactly what they’ve achieved, and it’s great to see a band that spreads themselves out stylistically so as not to paint themselves into a corner while keeping their potential repertoire vast and variable. Only those who can adapt to change stand a chance at being among the best, and it surely seems like Wothrosch are up for that challenge.

Bottom line: time will tell where Wothrosch land among the wide web of extreme artists, but it’s a safe bet, even this early, to keep an eye on their progress. They’ve achieved something meaningful and darkly vibrant with Odium, providing a raw approach that bands of the past have abandoned or squandered with miss opportunities or full-on creative misfires. For now, we’re in good hands - let’s see if Wothrosch can keep that fire in them.

Hardcore, am I right? It's the reason I exist

Fantastic band fantastic review!! You sir know what's up. And you're a wonderful writer. Thanks for the great reading material for a new beast of a band!

^ guy that wrote the article