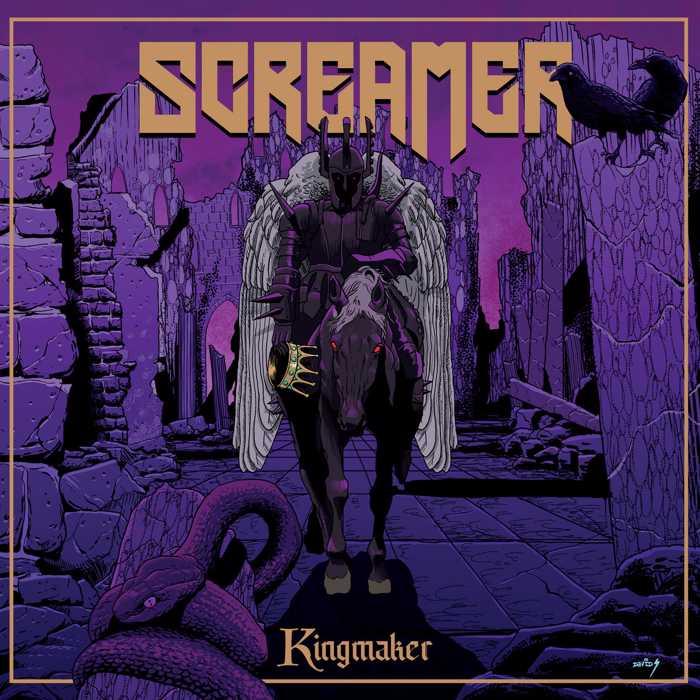 Nostalgia can be a funny thing sometimes. Every now and then an album can conjure up memories; hanging out in your friend’s basement, having a few beers, playing Dungeons & Dragons, and singing along while playing air guitar come to mind. Since 2009, Screamer has developed their sound, continued to carry the banner of the NWOBHM (New Wave Of British Heavy Metal) movement, and once again release material that makes you miss the music of an era long gone. Their work on Kingmaker clearly evokes the fantasy, the pageantry, and epic music that all collided during the eighties into one big adventure. But like any quest for heavy metal glory, they’re bound to be full of high hopes and eventual pitfalls. 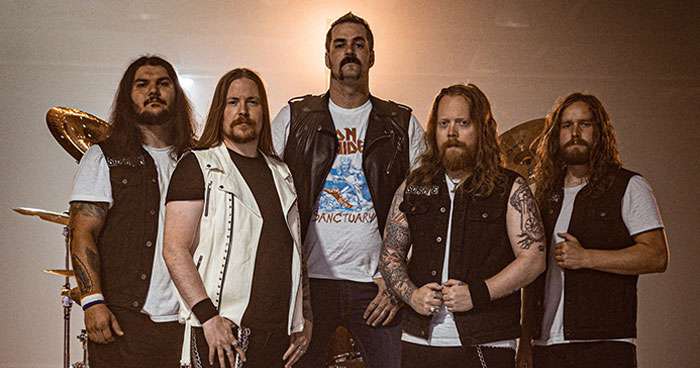 Every adventure starts a great premise, and in the case of Kingmaker, a leader is to come forth, ride out into battle, emerge victorious, and take the throne. Within a few listens you can easily hear the enthusiasm and desire the band plays with but is that all enough to win the crown worn by their predecessors? If you’re familiar with Screamer, you’ll know that they champion the cause of twin-harmonized guitars, soaring vocals and anthemic choruses, much like their heroes in Iron Maiden, Judas Priest and Angel Witch. This album sounds like it could fit right in on a mixtape with all of the classic bands of the late seventies and eighties, but is it as memorable?

The road traveled on Kingmaker has been tread before, with plenty of galloped rhythm playing, harmonized guitar parts in minor keys, and straightforward arrangements, which at times can fall a bit flat, and feeling a bit repetitive given the epic production, and theme they’ve gone for on this record.

Speaking of the production, this is where the record does indeed shine though. Kingmaker is sonically a big step forward for Screamer. The album sounds massive overall, which bodes well for the band. After a few listens you may be convinced that they are doing the NWOBHM sound better than some of their British counterparts. Given the tight, cranked Marshalls for the guitars, the delay and reverb drenched solos and pounding rhythm section, the album does seemingly have all the parts needed to be a standout record up until you dive into the lyrics.

Lyrically Kingmaker seems to tell a few different stories of life in a touring metal band, high fantasy adventure and some socio-political commentary, which isn’t really a problem that there’s variety, but the way they’re phrased seems lackluster and lacking description, and the metaphors don’t really make you feel compelled to take them too seriously. A few tracks on the record do stand out, as they seem to come together more effectively.  The rare melancholy song for Screamer “The Traveler” perfectly nails the trope of life on the road for the lonely musician, and “The Renegade” showcases the band at it’s best with a story of a lone warrior seeking out their foes and claiming justice, a story that matches quite well to the track.

Bottomline: Screamer sets out to capture the magic of the eighties with their music, but with tons of bands vying for attention in the NWOBHM/Speed Metal revival going on these days, it’s hard to stand out. Kingmaker has a lot of what it takes to be a really good record but lacks variety and some of the dynamics that their contemporaries play with.