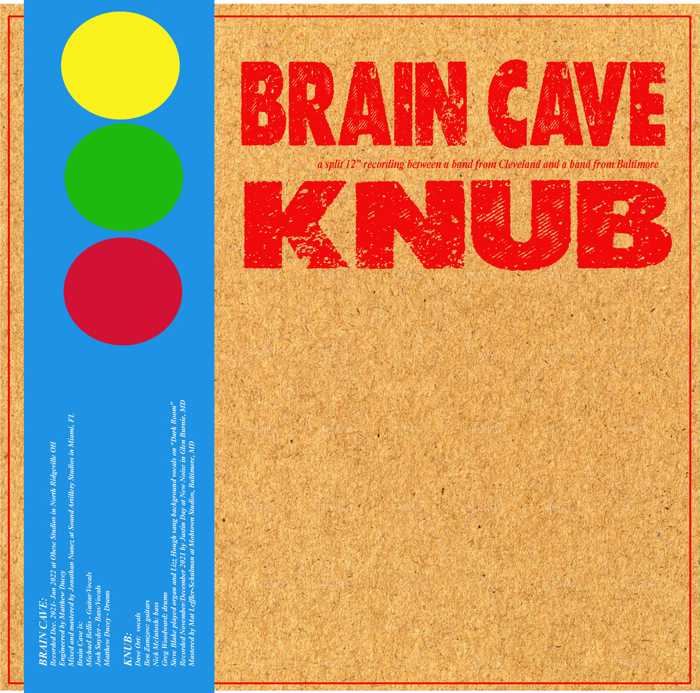 If YouTube music personalities and guitar blogs are to be trusted, then full-length albums are quickly becoming a thing of the past. While a single can certainly garner more immediate attention from the streaming and downloading portion of today's music consumers, it would seem the holdouts of the physical media buying generation are typically more interested in a greater quantity of material to chew on - sometimes even before "adding to cart". A solid compromise might be found in EPs or the here-discussed split release, offering just enough material to flesh out a breadth of sound while lessening the risk of ear fatigue and waning interest over longer playtimes. This appears to be the exact playbook in mind for Cleveland's Brain Cave and Baltimore's KNUB, who are generous enough to give us double the value (in this economy!) of nostalgic post-hardcore goodness. 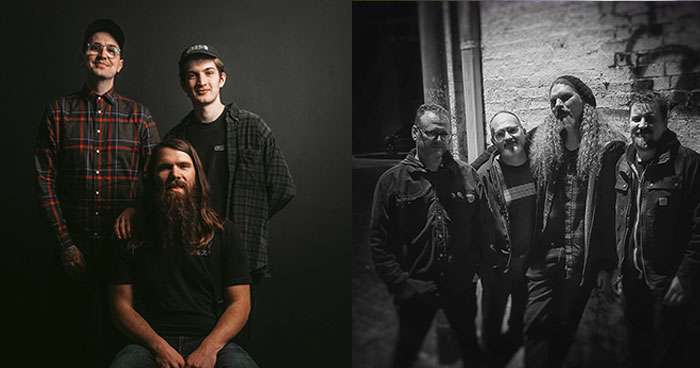 Brain Cave starts things off with an earnest performance that makes it easy to forgive their slightly one-note vocal approach. The "announcer voice" pitch is guitarist/vocalist Mike Bellis' main mode of operation, but the sincerity of his performance and a few memorable lines ("offer my help, disappoint everyone else" and "work... with your hands" from the first and fourth tracks respectively) help to seal the deal. The band's instrumentation possesses a similarly humble quality, relying more on spunk than huge riffs and tight transitions. That's not to say the band is sloppy in any way, but they have a tendency to throw out new sections seemingly at random and then circle back with a more focused denouement; for example, "Trailer Lake" cycles through about 6 or 7 unique parts before finally repeating something!

While the general pluckiness of Brain Cave's style allows a little wiggle room for these non-sequiturs to work in context, the more laser-sighted songwriting of “Slip Off the Roof” and “Solo Gazebo” grants these cuts a slight edge in the memorability factor. In fact, the sliding octaves of “Solo Gazebo” are highly reminiscent of Far on their monumental Water & Solutions album (which is never a bad thing). This contrast between concise songcraft and messy, yet spirited outbursts could possibly be given more room to breathe on an LP, but it also doesn't overstay its welcome here.

Knub dwells a bit more in dark brooding territory, employing great use of dissonance right from the opening of "the Sift". Helmet will likely be the first classic act that comes to mind upon hearing Knub's contributions to this record, but other obligatory names like Unsane and Fudge Tunnel should certainly be mentioned as well. Knub's real secret weapon, however, appears to be radio rock-adjacent crooning choruses as heard on closing track "Dark Room" as well as the previously mentioned "the Sift". The singing in these sections is familiar yet un-placeable, further adding to the nagging feeling that these are actually forgotten songs from some BMX video game soundtrack.

Elsewhere, "Easy and Clean" brings the heavy bass intro you knew was coming and "Paulie Sure" (top-tier song title) utilizes repetition of a positively grating riff to hypnotic effect. Knub appears to have fewer recordings under their belt than Brain Cave, yet the confidence they display with this material is more indicative of a band that has been refining their sound for years. The fact that Knub channels a literal plethora of nostalgic acts from yesteryear yet remains unique enough to carve their own space in the scene is no small feat, especially considering the brevity of this format!

Bottomline: This split lasts exactly as long as it needs to in order to highlight the various strengths of each band. The only "flaws" that can be pointed out amount to little more than minimal stylistic gripes; e.g. Brain Cave's unvaried vocal inflections or Knub's track "Paulie Sure", which may prove too tedious for some listeners. Minor imperfections aside, seasoned post-hardcore vets and new believers alike should find something to love on this one.