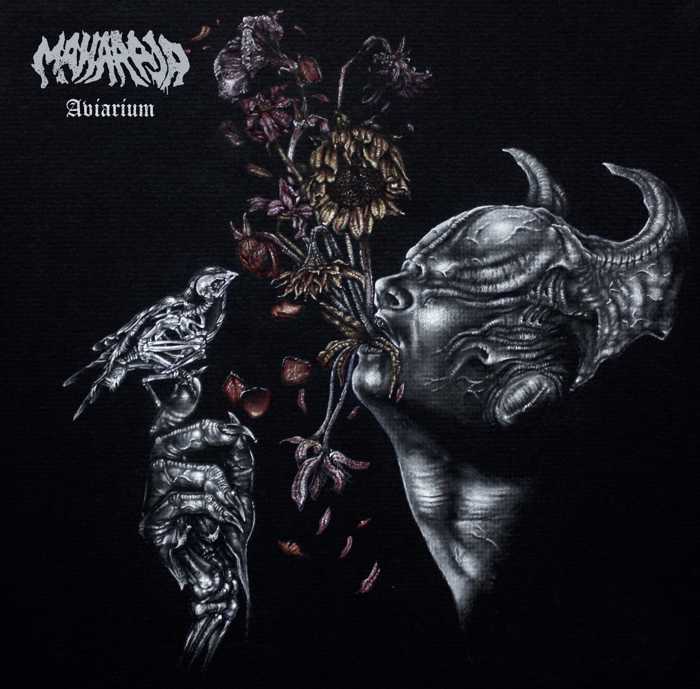 Art as a reflection of life is as old as time it seems, so it makes sense that Dayton, Ohio’s Maharaja would seek to immortalize their surroundings and observations in their art. On their Bandcamp page for Aviarium, they say:
“Lyrically and thematically, the album is about our home, Dayton Ohio. Being inspired by real events as well as observational insight, the album converses drug addiction, murder, police violence, and the effects of living in a turbulent, depressing place. Sonically, we wanted to capture the weight and intensity of these elements: death, hysteria, tragedy, violence. Each song has its own story, terrible and true.” 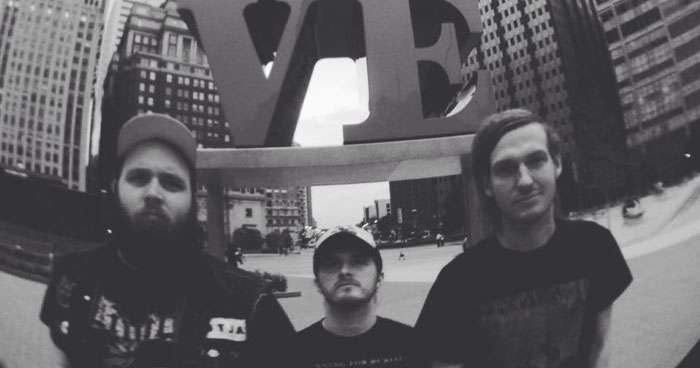 Many would agree that one of the best mediums through which to express this musically would be metal, specifically sludge metal, and that’s exactly what the trio have on order with their new Aviarium EP, though really it’s more of a mini-album. Four tracks — 24 minutes across them all — make for a dense, vast escape that’s perhaps more welcoming than you’d guess based on the above quite. Sonically though, it’s quite enthralling and true to its inspirational goal, if a little tonally-off given its themes.

Aviarium besets you with a massive weight. For as harsh as it is, it’s also acutely warm with its tone, like a weighted blanket. You can hear this so well in the intro to “Ballad of the Flightless Bird” (shout out to penguins, objectively the best flightless bird) which is stoned out of its mind for the ten-minute share it has of Aviarium. Though this track is at the end of the EP, it’s one of the only times Maharaja really give their music the space to breathe a bit. It’s a slow build with a high payoff of strong riffs that you can just coast on — perfect for hotboxing and cruising alike. It also has what are arguably the best vocals of the EP with clean(er) and clear(er) vibrato accented singing and a nice grungy range on display.

That said, atmosphere is key on all of these tracks. “Hopeless”, the first one, is profoundly downtrodden, making good use of its name. It exudes danger, the vocals capable of tearing right through you while doom-laden melodies sow chaos in the surroundings. It’s the most cataclysmic the trio get on this EP and sets an expectation that is shattered straight away with the rest of the EP — depending on your outlook, a good or a bad thing. “Soulless” is anything but, proving to be a rhythmic powerhouse for drummer Zack Mangold to talk his shit with his hands, but guitars are also treated to a ripping good time by Angus Burkhart, while bass brings up that chubby, rumbling low-end courtesy of Eric Bluebaum. The latter two members share singing duties and give us some bold gang vocals on this song.

Finally, “Lifeless” is darkly vivid. Lots of textures wrap the song up like a piece of hickory bacon, smokey and full of flavor. There’s a lot of Leviathan/Blood Mountain era Mastodon worship here, but Maharaja’s stoner qualities are stronger than Mastodon’s ever were which give them that fine edge and command over succulent melodies. The whole song skates by with some more repetitive rhythms as stoner-based metal is wont to do, but it only makes the hazy mood of the track more prominent.

Though its sludgy foundation is always hanging in the background, the stoner sensibilities run the roost with Aviarium. This is fine! It brings to mind some of the underground heavy-hitters in stoner/sludge/doom like URSA which is great company to find yourself in. This music just reverberates through your head and gives your brain a massage, ironically feel-good for something steeped in torment and pain. Then again, no one can hear your pain if you don’t make it palatable in some way. Maharaja have achieved just that - creating compelling art to share their story.

Bottom line: zooted or not, Aviarium is a gas, a highly competent EP that puts subtle variety on display and proves to be plenty adept at what it sets out to do. Maharaja are replete with talent and if this is your first venture into their music, it may yet make you a fan. More variance, progression, and leaning into heavier territory should suit them well if they continue down this path for future LPs and whatever they have cooking up.

This is a nice review and you should feel good about yourself.

Good review. Much better than the others.

I love American's that complain about the city they live. Hey idiots, you can move or accept the fact that you could in some other absolute horrendous place that is 99% of places outside of the United States. I hope you are embarrassed, you took all this time to write an EP about Dayton, Ohio.🤣🤦‍♂️

I guess this isn't the Canadian band? Cry my a river! You live in America. I would pay top dollar to see these guys live in Senagal or Malaysia. They would easily be able to pump out a full length about these places. The left is the worst. Biggest crybabies on the earth.

"Being inspired by real events as well as observational insight, the album converses drug addiction, murder, police violence, and the effects of living in a turbulent, depressing place." Uhhhh lol, you retards pretty much summed up every large liberal run metropolis in America, get over yourselves pussies.

I first thought it was about Maharaj. What a disappointment.

Hardcore, am I right? It's half the reason we exist