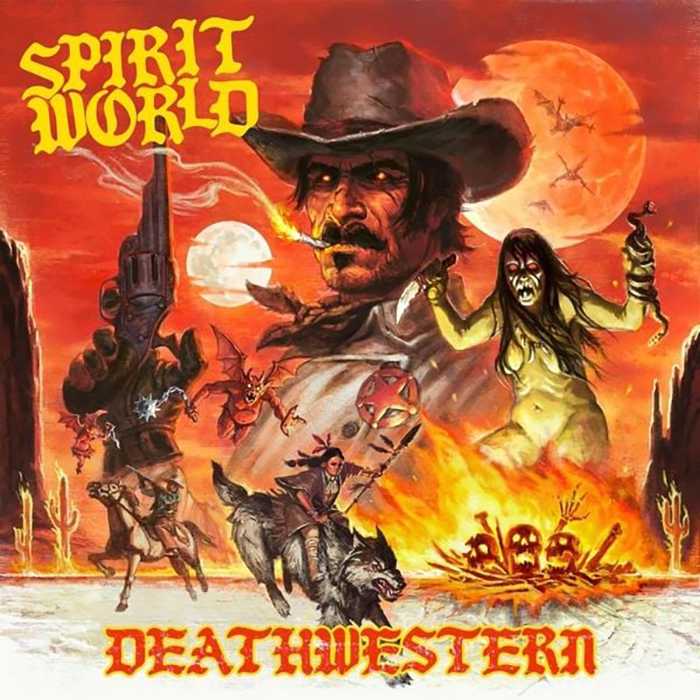 From the first moments of DEATHWESTERN, you know SpiritWorld are here to be a problem. The intro track’s jaunty country western veneer builds rugged intrigue a la the legendary composer Ennio Morricone only to be bisected by the title track’s heavy-ass metal salvo of riffs and precision. “Oh,” you think to yourself. “This is no ordinary metal album.” 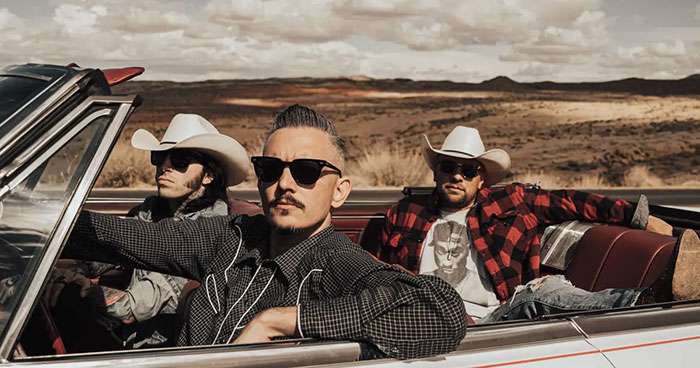 And it’s not. The approach may scream gimmick, but the mixture is genuine and, honestly, unique. The unforgiving grit of the Wild West, untamed and unwelcoming, combined with metal and hardcore’s raucous and caustic appeal is something that should be tapped into more often. It’s what SpiritWorld have banked on starting with their urgent 2020 debut, Pagan Rhythms, but if that album was a tenuous bet against the house, DEATHWESTERN ups the ante exponentially.

The admittedly shallow yet accurate elevator pitch for this Las Vegas group is “Integrity with more yeehaw.” This is hardcore-influenced death ‘n’ roll that pulls just about no punches. You can hear anything from Slayer to Power Trip in their instrumental approach (“Relic of Damnation” for instance has an intro that smacks of Power Trip’s celebrated single “Executioner’s Tax”), yet it all congeals into something so effective that you’ll be dumbfounded as to why this particular formula hasn’t been achieved before.

Much of SpiritWorld’s raw success can be attributed to frontman/vocalist/guitarist Stu Folsom who sings (yells?) with a primal ferocity, yet doesn’t lose nearly as much enunciation compared to tons of other metal and hardcore vocalists. The lyrics aren’t exactly profound, but they hit hard along with the music and beg to be screamed back. This is the type of band that would be hard to beat on stage. A fun band.

Taking place in an alternate history with demons slaying churchfuls of people, supernaturally crucifying preachers, and a great evil running amok in the sandblasted plains of the West, DEATHWESTERN manages to be more violent and punishing than the actual Wild West. The title track sets a mean precedent with wily riffs and guitar whining that imitates the screams of people being slain by devils made real (check the music video for this song if you want some storytelling with your cowboy metal). The line “don’t need a cross, just the end of a rope” is a great one to end on. Depending on your view, it only gets better from there.

“Moonlit Torture” is neck-wringingly dense with its guitar work, practically suffocating you with riffs from the start, and has a guest spot from Integrity’s vocalist Dwid Hellion. He and Stu make a mess of the track along with surgical drumming and rumbling bass. Many songs are caked in enough thick anti-religious sentiment it would make Kerry King blush and Tipper Gore clutch her pearls, but “U L C E R” is one song that plays with that theme the best, showing a man of lost faith who has seen hell itself and now plays for the other team, so to speak. It’s also extremely catchy. “Committee of Buzzards” also deserves a shoutout for its first riff alone - it’s bewitching.

DEATHWESTERN is rootin’, it’s tootin, it’s here for a six-shootin’ good time. It’s the bandit running your jewels on the train wearing a mask. It’s the bad motherfucker that walks into the saloon whose presence ceases all conversation and music. Most importantly, it’s a concise barnburner of an album that sets a new standard for unadulterated, uncomplicated hardcore and metal. It’s not the heaviest, it’s not the fastest, it’s not the most technical, but it is some of the best out there pound for pound. It will be tough to beat, for SpiritWorld or anyone else.

Bottom line: SpiritWorld are here to grind your ass into a Western Bacon Cheeseburger. Combine all of the above (and more) into a package that’s only 36 minutes long and DEATHWESTERN is a gem, polished to a neat sheen before being engulfed in blood. That’s the nature of the beast, but it’s one without much fault if you value aggression, great writing, high energy, and a raw entertainment factor that’s hard to come by in heavy music.

Really dumb ass gimmick. Not even creative or funny, just dumb. Can't even hear the music over their dumb cowboy gimmick.

Previous album was hard to not miss Folsom and think Integrity worship. This one adds a little more toward power trip, 4/4 crossover type o thing. They should add more of the western clean guitars.

The gimmick is real dumb. Tune is good though.

Goddamn that first video sounds way too similar to for whom the bell tolls. Not bad tho

Absolutely recycled thrash offering no innovation other than the costume gimmick. This is a power trip rip-off with cowboy hats. Get out of here.

EVERY ONE OF THEIR SONGS SOUNDS THE SAME

Damn that vocalist f*cking sucks live. Shit sounds flat and breathy on the recordings too. Worst part of the band

The cowboy influence isnt as strong as everyone makes it seem, it's pretty much Integrity/Power Trip worship fine by me