Goatwhore Angels Hung from the Arches of Heaven 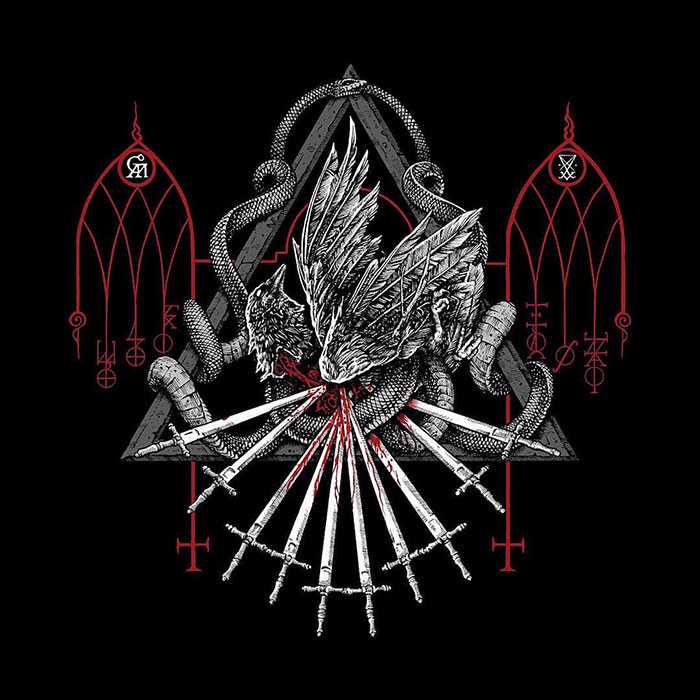 1. Invocation 3 2. Born of Satan's Flesh 3. The Bestowal of Abomination 4. Angels Hung from the Arches of Heaven 5. Death from Above 6. Ruinous Liturgy 7. Victory Is the Lightning of Destruction 8. Voracious Blood Fixation 9. The Devil's Warlords 10. Weight of a Soulless Heart 11. Nihil 12. And I Was Delivered from the Wound of Perdition
2022 Metal Blade Records
Our score 8
by Pete
10/12/2022

25 years is a long damn time. Turmoil lingers on for ages; conflicts are waged for what seems an eternity; countries, governments and people have fallen in countless blinks of a million eyes. Most recently, a global pandemic continues and hurricanes leave thousands without food, shelter, and safety. It just seems like fewer and fewer good things last long enough to enjoy them. However, in their 25th year, Goatwhore returns with their new album Angels Hung from the Arches of Heaven like the four-horseman riding through the world, reminding you that perhaps a swift and painful death is better than dragging your misery on for too long—and you’ll open yourself wide to their cloven-hooved stampede. 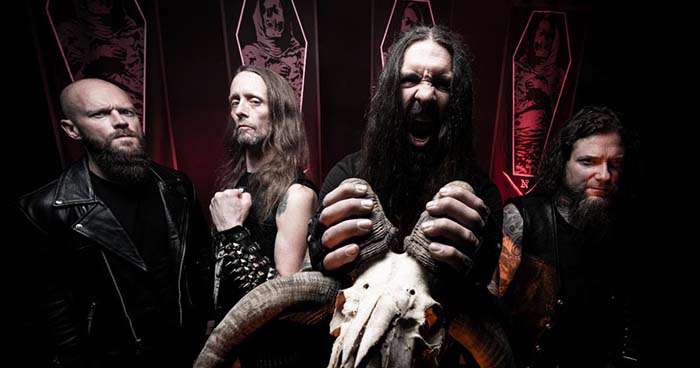 Hailing from the hellish humidity of New Orleans, Goatwhore has had quite the career in their 25 years. Built on the cycle of writing, recording and touring for each of their albums, they’ve put up an impressive body of work with their consistent and steady pace. Like a lot of bands throughout the pandemic, Goatwhore was able to take advantage of a dramatic shock to their system. What else could they do but to look within and push themselves to create more of their trademark blaspheming hymnals. While it was 17 years ago, it seems as though the sons of the Big Easy haven’t forgotten their own hell on earth in Hurricane Katrina and let their experience of disaster fuel them onward to new depths with each passing release.

Enlisting the help of both Jarrett Pritchard (who produced Exhumed and 1349) to record the album and Kurt Ballou (uh…everybody these days it seems) to produce it, the quartet were in good hands to get the most out of their performances and take the album as far as they possibly could. The quality of the recording, combined with some epic arrangements really puts this album on a new level from their previous releases. The sound of the record is built on varying extremes as well, with differing levels of precision, clarity, vastness and a raw element to it (particularly on the guitars and bass sounds) that all blend nicely together.

Sammy Duet’s guitar sound is reminiscent of some of Matt Pike’s tones on later High on Fire releases, yet you can hear each rumbling riff and each delay-soaked lead part clearly and effectively. The drums pummel away at your ears, thundering along between d-beat, marching tom-heavy beats, and blasts; all of which are beaten into your ears at full velocity. The mix gives way for everything to be heard clearly, and you really can pick up on every bit of murderous, violent intent in the performances, especially in Louis Falgoust II’s vocals.

It's hard not to find yourself banging your head along to this album, it will grab you by the shoulders and whip you into a frenzy. Blurring the lines between thrash, sludge and black metal, Goatwhore once again rides with a pretty decimating arsenal at their disposal throughout the album. Standout tracks such as “Death from Above”, “The Devil’s Warlords” and the titular “Angels Hung from the Arches of Heaven” all showcase the many heavy, fast and painful ways these doomsayers bring forth the apocalypse.

Bottomline: For a quarter of a century, Goatwhore has begun a new campaign of terror with this album, channeling their darkest and most malicious release in some time. Perhaps, having been closer to pestilence and a plague than ever before, with wars fought, famine still a problem for millions and countless people passing each day as a result of it all, the band was able to fully embrace the means to bring the end.

Goatw**re is meh to me but gotta admit they're legends. Lorna Shore is, um, cheesy AF.

Goatwhore is meh to me but gotta admit they're legends. Lorna Shore is, um, cheesy AF.

Go back to your Fortnite and Minecraft ^

If you're gonna give numerical reviews then at least speak to the score. What makes it an 8 nit a 9 or a 7? Writers suck these days.

Every Goatwhore song sounds exactly the same, and that's not a bad thing....(.Random insult towards Lorna Shore).