A lot of things start to happen around the start of Fall: people start decorating for Halloween, everything seems to be fucking pumpkin-spiced, horror movies tend to hit the theaters, and like clockwork, music sounds darker, moodier and just downright evil. Italy’s Abhor timed their release of Sex Sex Sex (Ceremonia Daemonis Anticristi) perfectly, and now we’ve been invited to take part in what feels like a sequel in a classic horror franchise. 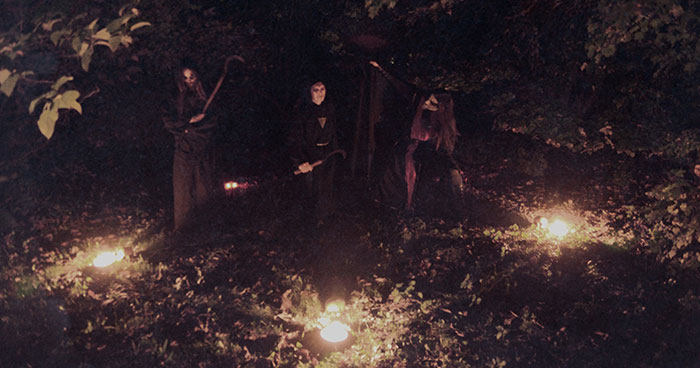 The secret to any great horror film is the score. Without the music we can still certainly be scared when something happens, but there’s no anticipation of what’s to come. Fortunately, Abhor understands this principal and makes sure to create a looming feeling of suspense. The listener may not be certain where the next verse may take them, or when another howling, demonic voice might appear, and opening their newest offering with organs straight from a Hammer Horror film, we’re greeted with a palpable sense of foreboding, doom and dread. The suspense grows and then the real terror begins.

The method to Abhor’s madness hasn’t changed much from their previous releases, and that’s okay. They continue to perform their rituals with a real fervor and devotion to the dark lord, though this time around the production quality has improved and the mix really allows for each of the instruments to be heard clearly and provide a balanced foundation for the growling and guttural shrieking vocals. After a few listens I enjoy that the bass is as forward in the mix, it gives the record a more “glued-together” feeling than other recent black metal releases I’ve listened to.

While the album excels in creating a spacious and huge sound, it does lack a bit in the variety. The songs are clearly well written, the arrangements well thought out, and the intention of the music is easily felt. There are certainly standout moments throughout the entirety of the record; the build of the beginning of “Ceremonia Daemonis Anticristi” and its organ melodies really showcase the breadth of emotions Abhor tries to conjure, the ebb and flow of the more aggressive drumming patterns of “Ode to the Snake” reminded me of older Samael (Worship Him era, predominantly), and the bridge section of “October 31 st , 2010” instantly reminded me the melodies and arrangements you would hear in your favorite episodes of Tales from the Crypt or inside of a haunted house. I do particularly enjoy that Abhor threw in a Mystifier cover on the album and didn’t try to change it much, doing it justice.

Sex Sex Sex as an album flows well, the track list seems purposefully laid out. Opening and closing with organ dominant pieces is a nice touch, really giving the album a film-like feeling, like the opening and closing credits of the album. Each song could be the music for a different scene; some tracks, more aggressive than others, imply ritualistic violence, while some are more subtle, lending themselves to mind-altering episodes of fanaticism, with all of them adding up to a frightening experience.

Bottomline: Abhor have once again channeled the raw power of their beloved dark lord and have shown why they remain one of the most listened to and respected Italian black metal bands. Abhor continues to straddle the line between new and old school black metal, and the line between theatrical and cheesy with their new release. While Sex Sex Sex doesn’t reinvent their sound, it is without any doubt that they stay firmly rooted in the darkness, bellowing out hymns of pure evil.

Seriously, stop rating everything 7-8. Its f*cking meaningless at this stage.

Satan is a trans freak and I hope they 43% themselves.

imply ritualistic violence. Cool story! How old are these losers, 16? Nothing more pathetic than metal bands being satanic these days.

Who is Ab and why is she a whore?