Take Life You Are Nowhere 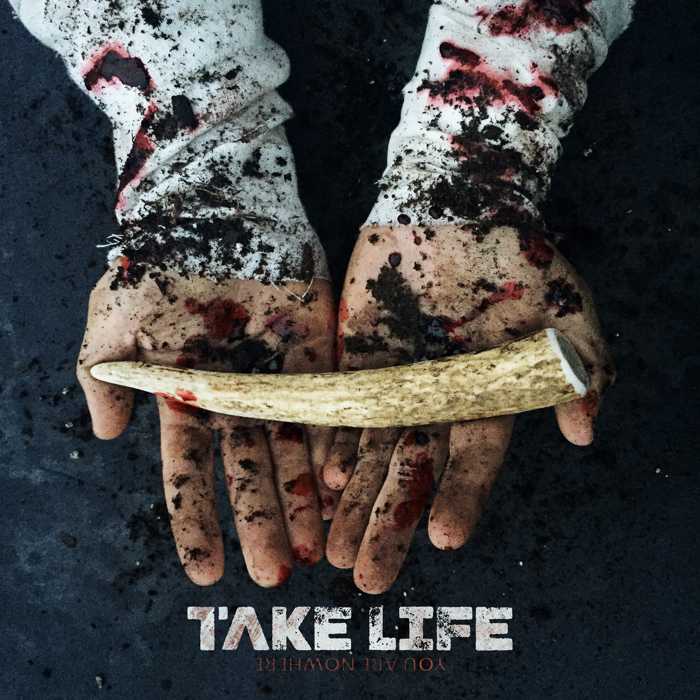 Take Life are here to tell you that it might not be all right. As things like the global pandemic and political strife carry on, optimists clutch to the hope that things will get better, but what if they don't? What if things have been getting worse for a very long time? You Are Nowhere, the group's debut album, isn't a political call to arms; it's a psychological case study. Themes of misanthropic resentment, distrust and general revulsion run throughout the songs. It's the viewpoint that maybe we're already too far-gone.

Comprised of vocalist Rob Fusco (Most Precious Blood, One King Down) and guitarist Rafe Holmes (Insvrgence), with session work by drummer Matt Guglielmo and bassist Randy LeBoeuf (who also produced the record), Take Life venture into some dark territories. The band's take on metallic hardcore swings between dexterous guitar licks and belligerent breakdowns, but doesn't settle on any given formula. The album plays out as one long connected piece, but each individual track brings its own approach.

Rhythmically, You Are Nowhere runs the gamut; spastic jabs clash with mid-paced passages and slow, mosh-worthy stomps. On "Old Habit, New Target," Holmes sprinkles squealing pinched harmonics into the unhinged blast beats before the song drops into its sluggish second half. "Leper Shepard" and "Storm Ruler" feature the aforementioned breakdowns; more quarter time than half, creating a barren openness of sustained chords. Fusco has never sounded as intense and menacing. The higher pitched yelp of his Most Precious Blood delivery has been replaced by a deeper, more grating attack. The vocalist even briefly sings in album opener, "Eucharistic Threat." It's that push and pull dynamic that keeps things interesting.

Interspersed throughout You Are Nowhere are samples of psychiatric interviews, moments that complement Fusco's nods to existential dread. Feelings of isolation appear on songs like "Chemicalm" and the album's title track. In "No Life Goes Unruined," the vocalist takes on an ages-old adage, editing it to a bleaker reality when he screams, "Laugh and the world laughs at you / Cry and the world laughs at you." Elsewhere Fusco touches on a downward spiral of mental health, accepting and embracing the darkness. Anyone who has struggled with depression can relate to the line, "I wake and my heart breaks, so disappointed that I did," from "Perfect Memory of an Impossible Event."

The album's fourteen-minute closer, "Check on the Welfare," is a slow-burning dirge. Sludge is a term that often gets misused, but when the point of reference, as it is here, is a band like Grief, it's a worthy descriptor. The song's funereal pace, ambient clean guitars and spoken word section push it into the album's bleakest territories. The final moments are a blazing, anxiety-ridden blast of euphoric melody as Fusco screams out, "Embrace me/ Hold me still / I beg death to embrace me / Hold me still."

Bottom Line: Fusco and Holmes, along with the help of Guglielmo and Leboeuf, have put together a fantastic debut album. As a continually running piece with no breaks between tracks, You Are Nowhere is an album that demands full attention, and with music as twisted and anguished as the lyrics, fans of any form of metallic hardcore will find plenty to like about it.

I didn't like it. I hate the review too

Finally, Lurkcity reviewed something good. Not the best review but decent.

Portslob 1 day ago I didn't like it. I hate the review too there he is ;)

I miss when hardcore bands wrote songs and didn't try and cram 55 riffs into a song to impress other guitar players. This would be amazing if you took out 75% of the riffs and variations of the same riff and just wrote a stripped down pissed version.

When Rob drops a new record, or steps onstage, you know he has a reason for doing so. That is the mark of a true artist. This album is extremely timely, introspective and unforgiving. One of the all-time best frontmen of the post 95 era.

been waiting for something like this since the last moutheater album.