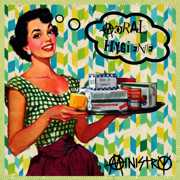 "How concerned are you?" is the sample introducing Ministry's fifteenth studio album, Moral Hygiene and its opening track, "Alert Level." It is a loaded statement which could refer to any number of things, but in 2021, all minds will be thinking of quarantines and vaccinations by the time the distorted drums, guitars and Al Jourgensen's trademark voice kick in. The song's chorus harkens back to "Let's Go" off of The Last Sucker, where Uncle Al beckons sardonically, "Let's go insane" as a call to war in Iraq. With "Alert Level," he asks us "Are you ready to die?" which is the frightening reality of a war some of our bodies won't be winning. It is a question we don't want to ask, but one that many of us have had to ask.

In "Good Trouble," Al's evil harmonica makes its return to accompany the riff sandwich made in this rather hopeful song about the future of America: "Get the party started. Get the fascists out." A sample of an audience erupting in applause ends the track, which like the album cover, feels mocking. Al knows there's more work to be done to get to ice cream and utopia, as shown on the Dark Side of the Spoon-esque "Broken System" with its sample proclaiming "Life will never be the same."

For fans of Al's Lard project, "Sabotage Is Sex" brings back Jello Biafra for a bass-heavy track which could have very well have melted into a new album from that band - the album cover for Moral Hygiene also being reminiscent of the 50s art style on The Last Temptation of Reid.

Ministry as of late have been keeping their albums tight, and the ten songs here don't overstay their welcome. Moral Hygiene's latter half still keeps things intriguing, with The Stooge's "Search and Destroy" cover being a shift from the overt political and social commentary found on the other tracks. The mid-tempo tracks "We Shall Resist" and "Death Toll" are rather noisy, beat driven and sample filled, with the latter mentioning COVID-19 directly. The closer "TV Song 6" is an injection of speed and fury which sits in the same frantic scrap pile as previous channel surfing TV tracks.

Post 2000s Ministry is always at their most memorable when they have something to rile up against or commentate on, making such albums as Relapse somewhat forgettable in the chronology of the band. Such albums as the Bush trilogy and Amerikkkant are time capsules of a certain period - mainly a political period in America but thankfully, Al's song writing makes going back to those albums enjoyable, as the case seems to be with Moral Hygiene as well. Ten years from now, when we look back on the pandemic era we are currently living in, we will have an audio record of the fake news, "Disinformation" and the "Death Toll" of the early 2020s set to a sample filled, industrial rock soundtrack.

There's good new hardcore and metal releases often but you guys are reviewing Zao and Ministry.

You f*ckwits review like 3 albums a year. f*cking lazy bums.

Al's become less subtle and can't create a banger to save his life anymore. Politics aside, this is just another embarrassment that's nothing like what the review is telling us here

Al is a mentally retarded burnout.

Get someone that will review something good for once.

Its an excellent album, Ministry is slow going back to their roots , and i love it!!!