Eyehategod A History of Nomadic Behavior 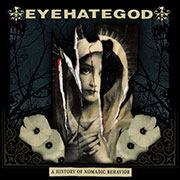 01. Built Beneath The Lies 02. The Outer Banks 03. Fake What's Yours 04. Three Black Eyes 05. Current Situation 06. High Risk Trigger 07. Anemic Robotic 08. The Day Felt Wrong 09. The Trial of Johnny Cancer 10. Smoker's Piece 11. Circle of Nerves 12. Every Thing, Every Day
2021 Century Media Records
Our score 6
by Colin
3/15/2021
A lot has happened since Eyehategod last recorded an album together. Factoring in the 2013 death of drummer and founding member Joey LaCaze, the life-threatening health issues of vocalist Mike Williams - which eventually led to the singer receiving a liver transplant, the departure of longtime guitarist Brian Patton in 2018, and their nearly being stranded in Europe due to the COVID-19 pandemic shut-down, the past eight years have been tumultuous to say the least. The band even had to cancel a show in Mexico after Aaron Hill, LaCaze's replacement, was attacked at knifepoint on his way to the venue. That it's nearly a miracle Eyehategod is putting out their sixth full-length is a bit of an understatement. But after thirty-three years of existence, the group, led by Williams and original guitarist Jimmy Bower, are still grinding away. And you wouldn't expect any less from a band that seems to thrive on negativity. Having withstood legal issues, drug addiction and the destruction of their hometown of New Orleans from Hurricane Katrina, Eyehategod's music has always been that of pure misery. Their 1993 album, Take As Needed For Pain may be the benchmark of sludge metal with its collision of grimy hardcore punk and oppressively bleak doom metal, and their subsequent releases Dopesick, Confederacy Of Ruined Lives, and Eyehategod are held in high esteem by fans of the genre as well. They are a band that has been incredibly consistent, even when they have albums spaced fourteen years apart. And consistent is certainly a way to describe their latest, A History Of Nomadic Behavior. The album has all the ingredients you've come to know and love Eyehategod for: heavy fuzzed-out guitar, blasts of chaotic fervor and, of course, Williams' inimitable tormented screams. Bower's swampy riffs are creative and engaging, while Hill and bassist Gary Mader hold the groove well enough. Unfortunately, there is something lacking on A History Of Nomadic Behavior that goes beyond the writing and performance. Perhaps it's the thin sounding production or the flow of the material, but the untethered energy of the band's past catalog is absent, leaving the group, now a four-piece, sounding rather... tame. Highlights like "Fake What's Yours" and "High Risk Trigger" are vintage Eyehategod; quick rhythmic shifts interrupt catchy guitar riffs and southern blues licks. But songs like "Three Black Eyes" and "Anemic Robots" stumble through clumsy arrangements that struggle to find a flow. The band locks in on "The Outer Banks" and transitions into one of the faster moments of the album, but the repeated ranting in closer "Every Thing, Every Day" falls a bit flat. Taken on their own, these songs, disjointed as they may be, are still enjoyable, but in the grand scheme of the album, they feel sluggish. Through the choppy, meandering compositions, A History Of Nomadic Behavior has its moments, but it never quite finds it footing. And the album's production certainly does nothing to help the material. Bower's guitar is muddy and muffled sounding, lacking the edge of their previous albums. Mader's bass is barely audible and Hill's drums sound tiny and distant, leaving a big open space where the low end should be. In the opening section of "Current Situation," grinding feedback gives way to a Williams howl, but the faint rhythm section, which should be adding a level of unease and energy, is all but lost. And in moments like the returning theme of "Circle Of Nerves," a descending staccato riff feels flimsy and lifeless. This may not be Eyehategod's strongest material, but it's definitely not their best sounding album. Bottom Line: There's no denying Eyehategod's legacy; they are one of the most important sludge metal bands of all time, but A History Of Nomadic Behavior may be their first miss. It isn't that the songs are necessarily bad, but more so that the album sounds a bit anemic. It's definitely worth a listen, but it pales in comparison to their earlier work.

I enjoyed it. This review sucks.

Def agree. Still dig it but yeah, weak compared to the amazing self titled album from 2014.