A World Without We All Die Alone 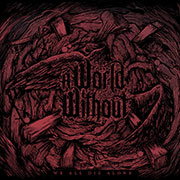 01. Absolution 02. Devil's Thorns 03. Phantom Pain 04. Decay 05. On Death & Dying 06. In Extremis ft. Steve Tinnon 07. House of Ash 08. Serpent's Tongue 09. Vitriol 10. Night Terror 11. As Above, So Below 12. We All Die Alone 13. Suffer
2020 self-released
Our score 6
by Colin
2/10/2021
There is a moment on We All Die Alone – the debut full-length from Portland, OR based A World Without – where everything starts to make sense. It happens in "On Death & Dying," the album's fifth track. Up until that point, it is difficult to figure out where the group is coming from. For the first quarter or so of the record the five-piece throws out a broad range of sounds, drawing from variety of metal sub-genres, without ever exposing their own personality. From the souped-up black metal mayhem of opener "Absolution" to the proggy deathcore of "Decay," everything A World Without does sounds vaguely familiar – not a Xeroxed carbon copy, but more like a distant memory. During "On Death & Dying" it becomes apparent that this is all intentional. The track weaves through technical metal riffs, syncopated chugs and a clean sung section, landing somewhere in the middle of Between The Buried And Me and August Burns Red. I'm not saying A World Without have no originality or persona - in fact, it's quite the opposite – but the group is working off some pre-existing scripts. Like the cut-up method of writing - a technique that employs sliced up words and phrases that are reorganized into new text - We All Die Alone is the metal musicians handbook rearranged, with each new phrase coming from a different chapter. On "In Extremis," the group calls upon the glitchy production techniques and bouncy riffs that have defined the djent category, while also working in slick melodic guitar leads and an off-kilter closing breakdown. The album's title track and lead single leans more towards late 2000s metalcore but sneaks in some blistering black metal rhythms. Throughout it all there is an underlying wave of synths - strings and pianos flow just below the heavy instrumentation, taking center stage in the album's quieter moments. It's an extra dimension of atmosphere that mostly gives the songs depth, although it does suffocate the production at times. Variety is a good thing, and A World Without have the skill to back to it all up, but at certain points the album gets lost in all the colliding ideas. The rolling piano lines of "As Above, So Below" walk a fine line of being symphonic metal clichés while "Serpent's Tongue" is a mish mash of disjointed riffs. Nevertheless, songs like "Phantom Pain" and "Vitriol" make up for the misses with their sheer brutality and engaging arrangements. Bottom Line: A World Without successfully tie together a little bit of everything, creating an interesting take on the often generic deathcore style. But We All Die Alone is certainly not without its faults. At times it feels like they are pandering to specific fans, adding trendy concepts at the expense of their songs. The band has the technical prowess, now I'd like to hear them venture into their own distinct style.