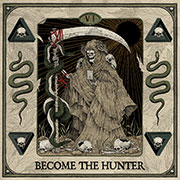 02. Two Steps 03. Feel Alive 04. Love Me To Death 05. In Hiding 06. Death's Anxiety 07. Skin Tight 08. The Scythe 09. Serene Obscene 10. Disaster Valley 11. Become The Hunter
2020 Nuclear Blast Records
Our score 6
by Kamron K.
2/14/2020
Suicide Silence experienced an unfortunate fall from grace that some could argue was mostly deserved, considering their eventual deviation from the sound that defined them. Thinking back to 2007 when they lit the world on fire with The Cleansing, it might be hard to imagine a situation in which they weren’t adored by the extreme metal community. That all changed when charismatic frontman Mitch Lucker passed away in 2012, however, the band pushed on, cranking out material pretty consistently and regularly in addition to relentless touring. Their tenacity alone wins them points in my mind, even if deathcore isn't a personal favorite of mine. So, what the hell is new? Well for these vets, quite a bit, including new album Become the Hunter. You aren’t going to be reliving The Cleansing, so let’s get that out of the way now. Fortunately, you are going to get a new brand of heavy-ass breakdowns and the omission of the loathsome cleans that tainted their 2017, self-titled release. Much like what we saw from The Acacia Strain at the end of last year, you can hear what I hesitate to call a reinvention, but rather more of a get-with-the-times feel to the music, layering the old chug chug chug behind guitar solos and thick, chunky baselines. There is clearly more structure to the music than is typically present in the deathcore formula and (thankfully) a certain distinction from track to track that is often nonexistent in the sub-genre. For every action there is an equal and opposite reaction, however, and this new sound introduces what I can only characterize as some nu-metal attributes, ones that may well might turn some folks off. I happen to be a glutton for anything Nu-ish (Catharsis was my limit, for sure) so I don’t mind it. That said, I would trade the moments that sound like Korn or Coal Chamber in favor of those that are closer to Dry Kill Logic or Nothingface. Positively speaking, vocalist Eddie Hermida's growls are vicious as hell. I have to be honest, I had to make sure he was still in the band because his vocals have more ferocity than I recall. Meanwhile, the drums are loud and powerful, and the guitar chords are varied enough to make things interesting amidst waves of down-tuned power chords. Bottom Line: I don’t think you can call this a return to form, circa 2007, but Become the Hunter is far from a dud and certainly worth a listen. The band can be proud of this one, but if we're all being honest with ourselves, it’s deathcore, people. Chug chug, pig squeal, blast beat, repeat.