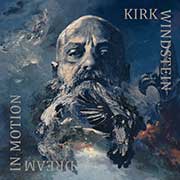 01. Dream In Motion 02. Hollow Dying Man 03. Once Again 04. Enemy In Disguise 05. The World You Know 06. Toxic 07. The Healing 08. Necropolis 09. The Ugly Truth 10. Aqualung
2020 eOne Music
Our score 6
by Colin
2/8/2020
Kirk Windstein has been a staple of the metal world for nearly three decades. With his band Crowbar, he helped usher the New Orleans Sludge Metal scene to prominence alongside other seminal acts such as Eyehategod and Soilent Green, creating one of the most distinctively influential eras for the sub-genre. The group’s skilled songwriting combined gigantic riffs, emotionally introspective lyrics and Windstein’s soul-wrenching wail. The result being a bulldozer of sound; a force so colossal it caused the animated MTV duo Beavis and Butthead to once infamously muse, “This music is slow and fat.” Windstein reached a wider audience as one of the founding members of metal supergroup Down alongside the talents of fellow New Orleans stalwarts Pepper Keenan (Corrosion Of Conformity), Jimmy Bower (Eyehategod) and Pantera’s Phil Anselmo. Down’s pedigree and infectious weed-centric grooves helped bring more attention to the greater Doom and Stoner Metal underground. By the mid-nineties Windstein was already an underground legend. While Crowbar is still active (and as powerful as ever), Windstein has released a collection of solo material that focuses more on the melodic, less pummeling tendencies of his writing. But fear not, seekers of the aural assault - Kirk Windstein has not gone soft. Well, not really. Dream In Motion meets somewhere in the middle of the Kirk we know and love and 40 Watt Sun’s Wider Than The Sky, albeit less effective than either. The album’s titular opening track and the proceeding “Hollow Dying Man” have an air of familiarity – their blaring distorted guitars and funereal pace are certainly reminiscent of Crowbar, but there’s a more languid finesse to the approach. Windstein finds more room for his howls as the chaos of his metal background relents to a more controlled song. The mammoth chords ring out but the riffs take a back seat to the composition. As the album progresses, Windstein tends to trade the distorted guitar for a chorus-effect laden clean tone. “Once Again” and “Enemy In Disguise” meld the fine-faceted progressions of the opening numbers with this more placid arrangement. A bed of synth underlies “Once Again” which, with the decay of the undistorted guitar and lethargic chord progression, brings to mind the dreary aesthetic of the aforementioned Wider Than The Sky, even more so when the Patrick Walker-esque minimalist guitar solo sneaks in. Building off the tone set, Dream In Motion pivots back to Windstein’s louder propensity with “The World You Know” and “Toxic.” While the former ebbs and flows between a quiet verse and juiced up chorus, the latter rolls along what could be an unused Down riff marking the album's major shifting moment. The last four tracks on Dream In Motion fail to live up to the expectations set by the first six, ranging from the unnecessary and monotonous to the bafflingly uninspired. “The Healing” is a strangely out of place instrumental that offers nothing special in its divergence from the rest of the album. It simply sounds like the session ended before Windstein had the opportunity to lay down his vocal track. “Necropolis” and “The Ugly Truth,” while well-intentioned, sound incredibly similar to each other. The overuse of a constant on-beat guitar strum becomes borderline annoying as these two tracks plod along tediously like one long tiring number. Finally, the album concludes on a version of the Jethro Tull classic, "Aqualung," which would have been better served as a single or bonus track. While Windstein does it justice, the songs notorious jagged guitar riff is such a leap from the album's doomy bleakness that it appears tacked on for run-time. It’s a strange way to end considering the manner in which it all began. Bottom Line: There is a lot to like about Kirk Windtsein’s first stab at a solo album, but it is certainly not without its flaws. The first half of Dream In Motion is excellent, but the album descends into mundanity. When Windstein is at his best, as he is on tracks like “Once Again” and “Hollow Dying Man,” we see a new side to this Sludge-Metal pioneer that I would like to get more of.