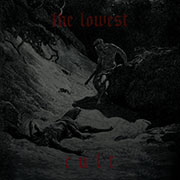 01. Alpha 02. Ceremony 03. Follower 04. Immaculate 05. Seven Seals 06. Death to the World 07. Revelation 08. 144 000 09. Silver City 10. Omega
2019 Hasiok Records
Our score 7
by Alex
11/25/2019
Hailing from Poland, hardcore/metal quintet The Lowest have put out a small handful of records since their 2011 formation. The band's latest output is their sophomore full-length, Cult, a ten-track effort that straddles myriad hardcore and metal subgenres. "Alpha" and "Ceremony" kick things off in a manner reminiscent of Cave In's space rock opus, Jupiter, before harsh vocals herald the arrival of aggressive metallic hardcore in the vein of Advent, and, as the gang vocals kick in, The Ghost Inside. "Followers" keeps things moving with more gang vocals and a slightly upbeat vibe, not unlike something one might hear on an Obey The Brave record. A nice heaping of brutality arrives with "Immaculate," which intersperses two-step hardcore sections among methodical low-end grooves, all culminating in a vicious beatdown ending. "Seven Seats" opens in Hatebreed mode but eventually morphs into something more diverse and textured. One of The Lowest's strengths is their refusal to settle for by-the-book hardcore or hackneyed metalcore, instead adorning their tracks with streaks of ambient metal and subtle melody. The Lowest hammer home the previous point on "Death to the World," where synth pads briefly serve as the foundation for desperate vocals before chunky metalcore arrives to pound the song forward to yet another brutal conclusion (with vocals that sound very much like those of First Blood frontman Carl Schwartz). Synthesizers also set the initial tone for "144 000" but are quickly overtaken by palm-muted hardcore grooves. Midway through the track, melodic vocals appear and commence the song's mutation into something akin to late era Poison The Well. The Lowest's penchant for bouncing around various sonic corners of the hardcore and metalcore palette is admirable, though it may also undermine the group's ascent. From track to track, they don't always sound like the same band and one can't help but detect hints of an artistic identity crisis. Then again, if the music is enjoyable, does it really matter? Penultimate composition "Silver City" is a melodic metalcore vehicle that grows more emotional and sprawling as the song progresses, a three-minute crescendo that should resonate with fans of Taken or even Shai Hulud. "Omega" concludes the album in gloomy fashion. Following an opening that sounds curiously similar to the first half of Converge's "Phoenix in Flight," the track transforms into a clinic in layered guitar motifs and counter-melodies. As sinister as it is hopeful, "Omega" is a deft ending to a solid album. Bottom Line: Whether due to commendable balance or regrettable vacillation, the pendulum swings regularly on this record from crushing to sentimental. Fortunately, The Lowest seem adept at both.