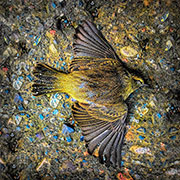 01. ~~~~~~~~~ 02. False Hope 03. Morgue Bait 04. Wish In One Hand ... 05. ((((((())))))) 06. Renovicted (Ode To Vancouver) 07. Drag The River 08. LRH 09. oooo0OO0oooo 10. Intravenous Flytrap 11. Reptilian Endoskeleton 12. Neon Black 13. Dead Inside
2019 self-released
Our score 6
by Alex
11/11/2019
Launched in Thunder Bay, Ontario in 2016, Alienatör are imbued with some of the traits one might expect from the former wilderness outpost; this band is burly, grimy, and the sonic manifestation of discontent. If it's motivational music you seek, back away slowly. Alienatör ply their trade in the margins of metal, with elements of sludge, noise rock, hardcore, heavy metal, and crust punk. Listeners of Pariahs, the band's debut full-length, will hear shades of Unsane, Red Fang, Cursed, Kvelertak, Acid Bath, and Cancer Bats, among other guitar-heavy acts by whom sophistication and polish are eschewed. Following a brief intro track of little apparent value, "False Hope" comes crashing in with chunky grooves and throaty vocals, remarkably reminiscent of crusty New England unit Scissorfight circa 1999. Third offering "Morgue Bait" thunders forward with meaty riffs, pounding drums, and an up-tempo chorus that resolves into an ominous, half-time break. Its enraged vocals and bleak ending render this impressive track a satisfyingly sullen affair. Seemingly hesitant to continue down such a grim path, Alienatör then deliver perhaps the album's most palatable song, "Wish In One Hand ...," an ever so slightly melodious offering that alternates between plodding and galloping, and features dual guitar leads with a vague hint of Baroness. The subsequent grooves of "Renovicted (Ode To Vancouver)" are spelled by dirty blues rock riffs that would make Clutch proud, all while frontman Brad King's hoarse vocals spew forth a steady stream of venom. With its dearth of melody and thick coating of despair, Pariahs is neither uplifting nor comforting, and with lyrics that touch upon gentrification, addiction, murder, and the evils of Scientology, that's most certainly the point. Alienatör are miserable and they'd like you to join them. "Drag The River" and "LRH" feature more of the same and at this point the album's lack of variation and Alienatör's lack of originality is liable to invite listener fatigue. Fortunately, energetic instrumental affair "Intravenous Flytrap" livens up the proceedings just enough to stave off exhaustion (and, for now, depression). Enter "Reptilian Endoskeleton" and "Neon Black," the former a palm-muted thumper with fuzzy guitars and pummeling rhythm section, the latter a sprawling affair by Alienatör standards. With a title befitting its bleak atmosphere, "Dead Inside" closes out the album in desolate fashion. To critique the final three tracks is to critique the album at large; it's all completely competent but not particularly memorable. Alienatör make no egregious mistakes on Pariahs, but the one-dimensional vocals, relentless guitars, and grungy production often lend a laborious air to the proceedings. There's enough here, however, to suggest that Alienatör will grow into a formidable act. Bottom Line: This is a well-executed album slightly hampered by its tracks' homogeneity. Nevertheless, Alienatör have nothing to be embarrassed about on their debut LP; those who enjoy wallowing in aural sludge should give this record a spin or three.

There is something extra special about being able to capture the love between two old friends. Watching @petertodd and @ateeyatodd say "I do"