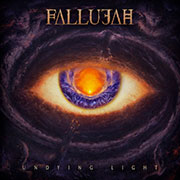 01. Glass House 02. Last Light 03. Ultraviolet 04. Dopamine 05. The Ocean Above 06. Hollow 07. Sanctuary 08. Eyes Like the Sun 09. Distant and Cold 10. Departure
2019 Nuclear Blast Records
Our score 6
by Leonard
4/11/2019
For those of you who have never heard Fallujah, these guys have a very specific home on the musical spectrum. They play a form of progressive metal that, for the most part, trades aggression, brutality and moshability for pure instrumentation and technical skill. While their older music varied from The Harvest Womb (2011), which was relatively generic technical death metal through and through, to The Flesh Prevails (2014), which was much slower and more ambient with an emphasis on jazzy guitar leads, to their last album, Dreamless (2016), showcased a progressive/technical metalcore sound that they've grown into and appear comfortable with, as evidenced by tracks like "The Void Alone." Now that brings us to the band's latest release, Undying Light. I will say first that I was a bit surprised when the accompanying promotional biography compared Fallujah to The Faceless and Job For A Cowboy, among others. After several listens to this album, I remain a bit perplexed. Of those two bands, JFAC would be the one who could arguably be considered most similar. However, when comparing Fallujah to Job For A Cowboy, the two biggest differences are the pacing and vocals. While JFAC is fast-paced blast beat-centric tech-death metal, Fallujah is much slower and more progressive with drawn out instrumental interludes, quite often more than one in a given song (akin to much of the work of a band like Opeth). The other very obvious and pronounced difference is the vocals; while Job For A Cowboy (for last couple releases, at least) employs mainly very low-pitched death metal vocals, Fallujah mainly uses more mid-range metalcore-style screaming. Additionally, in terms of musical focus, though there is no shortage of technical skill both in the riffs and overall songwriting (as well as an extremely competent rhythm section), the reliance on churning and distorted melodic chord progressions is more similar to bands on the metalcore/melodic-hardcore end of the spectrum, such as Misery Signals or Architects (rather than tech-death like The Faceless). And I am saying that in the best possible way. Opening track "Glass House" in particular has an overall sound that one might hear on Of Malice and the Magnum Heart, evident in the well-orchestrated interplay between drums and guitar leads. Tracks like "Last Light" and "Hollow" also follow a similar formula; they feature prominent and drawn-out instrumental passages in addition to passionately screamed vocals and guitars, which range from distorted chords to well-placed leads that are technical in an emotional way befitting each respective song (rather than the "technical just for the sake of being technical" way of certain other bands). The biggest drawback I can find with an album like this is the frequent adherence to formulaic song structures. While this is great for people who are primarily fans of progressive metalcore, the myriad slow and progressive stretches in songs are likely to turn people off if they aren’t already fans of the style and/or extremely patient when it comes to music. The same can be said of the acoustic interludes, although they are almost universally well-written and performed. All of this is not to say that Fallujah doesn't deviate from this formula. One example, "Sanctuary," features an opening riff that might be heard on an older Darkest Hour album (along with some breakdowns and guitar leads left and right). This touch is pleasantly nostalgic for those of us who miss the heyday of early/mid-2000's melodic death metal-influenced metalcore. "Ultraviolet" also features a nice sweeping solo that could've found its way onto a Kris Norris-era Darkest Hour album. The following track, "Eyes Like The Sun," continues this faster riff-heavy style for its first half before slowing down into one of this album's many mellow instrumental interludes. The next song, "Distant and Cold," is the weakest cut on the album. The track features a "screaming vocals over acoustic guitar" juxtaposition and misses its mark completely, both from a musical and production standpoint. The results are unfortunate. Fortunately, this track can easily be skipped over as the next (and final) song, "Departure," features some stellar riffs and drumming, all with plenty of momentum and energy, ending the album on a high note. Bottom Line: Overall, your opinion of Undying Light likely depends upon your affinity for this style of music. Although I enjoyed this album for the most part, I'm sure many others, particularly those who lack interest in this style of progressive metal/metalcore, would find this album to be trite and/or monotonous. However if you like progressive metalcore or slow and methodical progressive metal (of the Opeth variety), or you've enjoyed Fallujah's past work, I'm confident you will enjoy Undying Light as well.

I didn't like it much at all when I first listened.. it's grown on me though

I was a Fallujah fanboy, but I'm sorry to say that this album bummed me out. I know there have been lineup changes, but I expected them to at least keep it relatively technical considering their past releases.

While their older music varied from The Harvest Womb (2011), which was relatively generic technical death metal through and through, to The Flesh Prevails (2014), which was much slower and more ambient with an emphasis on jazzy guitar leads, to their last album, Dreamless (2016), showcased a progressive/technical metalcore sound that they've grown into and appear comfortable with, as evidenced by tracks like "The Void Alone." you needed to read this out loud