The Ocean Phanerozoic I: Palaeozoic 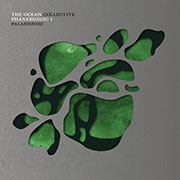 1. The Cambrian Explosion 2. Cambrian II: Eternal Recurrence 3. Ordovicium: The Glaciation of Gondwana 4. Silurian: Age of Sea Scorpions 5. Devonian: Nascent 6. The Carboniferous Rainforest Collapse 7. Permian: The Great Dying
2018 Metal Blade Records
Our score 9
by Kamron K.
11/20/2018
Let's address the elephant in the room right freakin' now: Phanerozienzoificrichic or whatever the hell this thing is called will compete for worst album name of the year, certainly the worst of The Ocean's catalog. There is nothing more obnoxious than totally over-complicated concept albums, or in this case, simply overthought titles. I am sure it's wonderfully meaningful to the artist, but like many forms of art I will never understand, this is just perplexing. It's not unlike a craft brewery that makes obscure styles and refuses to label the beer style on the package. Then when asked why they elected to do it that way, the brewer very confidently replies, "We really want people to approach our beers without a bias or any preconceived notions about the style that would otherwise influence their experience." Bro... I am about to spend $17 on 330mL and an hour buzz so at least give me the common courtesy of a reach-around. Ten years from now, how am I supposed to remember that amazing track I heard back in 2018? I can see it now, "Ok son, THIS band is going to blow your mind. They had this great song once called 'Ordovicium: The Glaciation of Gondwana' off their seventh studio LP called Phanerozoic I: Palaeozoic." "Hmm I don't remember that one, Dad. You sure that was The Ocean?" "Yeah, yeah totally. Remember? There was Fluxion, Aeolian, Precambrian, Heliocentric, Anthropocentric, Pelagial, and now Phanerozoic I: Palaeozoic. It really left an impression with me." Said no one ever. Ok...phew...I digress. Let's get on to the music. This is a masterpiece. Phanerozoic will compete for Album of the Year and it's well-deserved. The Ocean has excised much of the overused and excessively lengthy elements that lacked direction and slowed the progress of their last couple full-lengths. Whereas Precambrian and Heliocentric saw the addition of prog elements in what seemed to be just the right places, Anthropocentric and Pelagial suffered from subtraction by addition. The music became so sultry it slowed to a crawl and lacked the energy and complex anatomy that fans of the band had come to love. The dissolution of their metal influence was mostly acceptable by their fanbase in exchange for a more mature sound and skillfully crafted songs, but unfortunately the law of diminishing returns proved to be absolute and questions arose about their ability to deliver another album with the fury of past works. Those questions have been answered. Interestingly enough, despite the number of significantly catchy moments, I was surprised by the amount of concentration required to familiarize myself with the songs. Don't misunderstand me though, this album does not require attentiveness due to arbitrary complexity. It is deep and well-composed, and simply demands your attention. It draws you in and despite the amount of (unnecessary) work that has been put into the naming conventions, there seems to be little in common from one track to the next. In other words, there is plenty to enjoy within the confines of each track. And while I don't know if the songs are related or possess any relevance as a collective, that's totally alright, because there is a cornucopia of delights to revel in on an individual basis here. In terms of its overall sound, Phanerozoic incorporates vital drop-tuned chords and slow, undulating Tool-like base lines, sometimes layered over stuttering synth waves and other times in the midst of wonderful Enya-esque piano and violin tracks. In "Silurian: Age of Sea Scorpions," treble-laden crashes fill the upper end of the soundscape and serve as perfect punctuation to the delicate piano accompanying Loïc's cleans. The production quality is on point and no member of the band overplays or hogs the show. It's all about the whole. I found myself somehow hearing everything at once and really enjoying the songs for what they are, as opposed to being distracted by one instrument. Bottom Line: Phanerozoic I: Palaeozoic is a stunning piece of work with beauty to behold at nearly every turn. It's so complete that I struggled to pick one song I liked better than another. This isn't the most technical display of musicianship you will hear all year, but it sure is gratifying. Whereas Pelagial saw The Ocean trying a little too hard and departing too far from the qualities that earned them their place in the prog pantheon, their newest opus serves as a stern reminder that they were simply exploring their creative limits. Fortunately for their adoring fans, they appear to have no ceiling.

Maybe, before we even begin a deeper discussion about the platitudes of black metal and all of our concerns about the future of the pagan warrior's place outside of the deafening – no puns allowed here, people – realms of Blashyrkh, and definitely before we start throwing around made-up words that we all embarrassingly use in private to describe the eyebrow-curving, elitist authenticity of our darkest loves in this sub-corner of music.

what the hell was that first paragraph?

I thought this was a great review, LOL'd at the first paragraph

This is by far the worst review I've ever read.