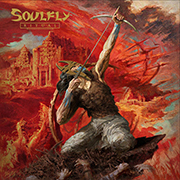 01. Ritual 02. Dead Behind the Eyes 03. The Summoning 04. Evil Empowered 05. Under Rapture 06. Demonized 07. Blood on the Street 08. Bite the Bullet 09. Feedback! 10. Soulfly XI
2018 Nuclear Blast Records
Our score 8
by Kamron K.
10/29/2018
The Cavalera brothers, Max in particular, are household names in metal and have been for some time. Though opinions and reviews tend to be pretty mixed from project to project and album to album, most seem to have abundant respect for Max's accomplishments, and to a large degree it feels like he is beyond reproach. Deserved or not, it's there and it's palpable. His body of work is quite substantial and for the most part delivers (every artist has work that even he/she would admit isn't their favorite). Being credited with producing some of the most influential metal in history, mostly via Sepultura, it's got to be especially difficult to stay competitive or even relevant at this stage, but read on folks, because this almost-50-year old shredder somehow found his groove...again. In terms of its overall sound, Ritual follows much of the same methodology that Max's other projects have: tribal undertones are at the core of the music and not just looped in as intros or outros, although those are present as well, but in the rhythmic pounding of the drums, groovy drop-tuned licks, and lyrical topics. Song titles such as "The Summoning," "Under Rapture," and the title track foreshadow what's in store prior to the music even starting. Hell, even the album artwork -- an armored warrior poised to cast an arrow to signify victory earned at the expense of the handless victims butchered at his feet -- projects you onto the battlefield in some kind of post apocalyptic, barren earth. Songs like "Feedback!" gallop at 140 bpm and break into swift solos, paying tribute to the late, great Lemmy. Another opens with beautiful classical guitar and flutes, and the final track ("Soulfly XI") exhibits a myriad of instruments, as if Max enlisted Sting and Enya to collaborate on the closer, with saxophones, bongos, and Clapton-meets-Gypsy Kings picking. There are plenty of standouts too, like "Dead Behind The Eyes," which features Lamb Of God's Randy Blythe and showcases his signature guttural growls supported by Max during the chorus. Stylistically you can expect a total amalgamation of groove, thrash, power, and even bits of nu-metal (in sparing amounts), but there are also some well-timed punk riffs. Much of the monotony that diminished Soulfly's last couple of releases has been flushed out and replaced with a good degree of variety. You know that feeling you get when you just wish a Soulfly song would have ended a minute or two ago? Yeah, that is a non-issue on Ritual. This is one of their most cohesive and well-thought out albums to date. Meanwhile, fans of the harder side of the Cavalera brothers can take solace in knowing there's no shortage of heavy music here; there are some classic head-banging Max-riffs to be found. Bottom Line: In a time when talented musicians and self-produced YouTube sensations are common, and virtuosity and technical prowess seem to be the norm, Soulfly manage to take it back to their 'roots' and show you that they can still bang out quality jams nearly 35 years after Max debuted Sepultura. Ritual is approachable right from the get go. You don't have to get through it three times before you can discern one song from another or strain your eyes while you squint trying to make out a melody buried in a wall of noise. This is a joy to listen to from 0:01 to 43:13.

album isn't horrible, but 8/10? Next time let someone else besides a gushing fanboy write a review, webby.