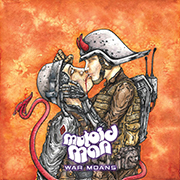 01. Melt Your Mind 02. Bone Chain 03. Micro Aggression 04. Kiss of Death 05. Date with the Devil 06. Headrush 07. Irons in the Fire 08. War Moans 09. Wreck and Survive 10. Afterlife 11. Open Flame 12. Bandages
2017 Sargent House
Our score 8
by Colin
6/15/2017
When Mutoid Man released their debut EP, Helium Head, just four years ago, the group had the appearance of a one-off project for its founding duo of prolific metalcore veterans. Singer/guitarist Stephen Brodsky and drummer Ben Koller of Cave In and Converge, respectively, blasted through giant riffs and complex rhythms in a fury of speed and technicality while their live sets beamed with a sense of joviality. It all came across as a fun break from the countless other bands and projects they were involved in. But with the addition of bassist Nick Cageao and release of Bleeder, their first full length, the trio settled into more of an established sound, crafting songs that were as engaging as they were challenging. On Mutoid Man's second long player, War Moans, the group builds further upon that foundation. The musicians still play at blazing speeds, but the song structures are more defined. Brodsky has almost entirely ditched the screams for his well-honed singing, utilizing the strength of his voice to create catchy and diverse vocal lines. Koller and Cageao are less of a rhythm section and more of the driving force, providing depth to the already monstrous riffs. The thrashy guitar of tracks like "Micro Aggression" and "Afterlife" blend nicely with the stoner rock grooves found in "Kiss Of Death" and "Open Flame." "Irons In The Fire" runs through a double kick led power metal-inspired chorus while the title track, with its jagged riffs and yelled refrain, is straight Slayer. The composition even features an over-the-top Jeff Hanneman-style solo. This all sounds as though Mutoid Man are disjointed, throwing everything they've got into the pot, but there is a consistency to the overall sound prevalent throughout the entire record. Not once does War Moans come off as confused or unfocused – in fact, it's the exact opposite. The group always seems to know what twist and turn to throw, giving each track its own identity. The production on War Moans is also fantastic. Brodsky's guitars sound super thick and are clean enough to display all the intricacies of his playing without being overly slick. Cageao has an ultra-low, sleazy overdriven bass tone that keeps the bottom end of the record nice and fat, while Koller's drumming sounds live – not mechanical or overly produced. War Moans closes with perhaps its most compelling track, "Bandages." Accompanied by underground vocalist extraordinaire Chelsea Wolfe, Mutoid Man pump the brakes, proceeding at about half their normal speed. With its catchy chorus and sustained chords, "Bandages" comes off as an arena rock sing-along that wouldn't sound out of place on a new Cave In record. It's the perfect change-of-pace closer to the breakneck speeds of the rest of the record. Bottom Line: War Moans is a display of a band hitting full stride. Mutoid Man seem to have figured out exactly what they are - their hooks are as big as their riffs. War Moans is ultra catchy, ultra heavy and just plain fun. I'm already anxious for more.

Super thick, sleazy and fat. You're making me hard, dawg.

That Jeff Hanneman-esque solo in the title track was actually plyed by Marty Friedman.

I like this album and I usually hate everything.

God, the amount of Islamic propaganda on this album is absolutely ridiculous.