Terror The Walls Will Fall 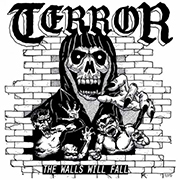 1. Balance the Odds 2. Kill 'Em Off 3. The Walls Will Fall 4. No Love Lost 5. Step to You
2017 Pure Noise Records
Our score 7
by Scott Ustel
5/9/2017
'Terror is as Terror does' pretty much sums up the aesthetic of the band. Scott Vogel, frontman and crowd surfer extraordinaire should not be a stranger to any longtime running fan of North American hardcore. Starting his multi-decade spanning career on the East Coast via the gritty streets of Buffalo, New York, Vogel fronted a handful of intense and popular outfits. Slugfest and Buried Alive are hardcore stalwarts, their pummeling riffs and no bullshit attitude cemented their status as second wave, underground hardcore legends. I still have my Buried Alive two-song demo, purchased while attending their second show. (On cassette tape, no less.) Having met Vogel a few times during these early years and bumping into him a handful of years ago once again, I can say that it doesn't seem as though the man has changed much at all. He still came across as humble and driven by a passion to keep the scene pure, fun, full of energy and most importantly, alive. His musical direction has always seemed to stand by these values. One of the things about hardcore that I've respected since my introduction to it two decades ago is the importance in the adherence to value systems, whatever they may be. After the dissolution of the aforementioned bands and a relocation to Southern California, Vogel resumed his war on the mainstream by pulling together Terror in 2002. Combining raw, unbridled testosterone, a passion for scene politics and fueled by a ferocious aggression focused on the experience of the underdog, Terror hit upon a winning formula. Hardcore, thrash and punk roots are at the base of this rock 'n roll killing machine. Stripped down and basic has never been more frightening. The Walls Willl Fall EP features five blisteringly dense tracks that pack about as much energy in their short duration as the sun does in its 8 billion year life cycle. Vogel and company keep things fast, lean and angry, the way many extreme music fans envision American hardcore should be. Never as thick or brutish sounding as other hardcore bands with a metallic edge to them (Hatebreed comes to mind), they avoid the elements that turned hardcore into metalcore, screamo (not the real kind) or any of the countless other derivatives of the genre. The obvious nods to hardcore punk, particularly via the torrid cover of Madball's old-school track "Step To You," are sure to bring a grin to the face of many. Fans of the genre should appreciate the change in cadence from modern song structures to more old school formulas. Propelling the vocal attack are four of the tightest musicians currently producing music in the genre. Nick Jett, original drummer and the only other founding member still in the band, hits hard and precise giving a sharp rhythmic punch for the crunchy guitars and thick bass tones to follow. The bass tone of Dave Wood is so fat in fact, that at times it threatens to blow speakers out, rumbling alongside the dual guitar work of Martin Stewart and Jordan Posner. The recording is crystal clear and chock full of razor sharp buzzing guitar chords, thick and pummeling low end and tight, snappy sounding drums and sing-alongs. Vogel's lyrics are typically based on loyalty to the scene and support of the underground, and you would be hard pressed to find fault in the quintet's devotion to this ethos. Famous for his devotion to the scene and addressing the struggles of the every man, he seems to tell tales that are relatable to everyday experience. He never really challenges anyone beyond asking them to be true to themselves; he doesn't ask you to be something you're not and it's my guess he doesn't want outsiders who don't belong either. The track "Kill Em Off" delivers this sentiment in spades and is catchy and hook-laden for an angry rager. Bottom Line: Terror is a hardcore band, plain and simple. Founded in struggle, animosity, aggression, ambition and passion, hardcore is a genre that constantly tests its limits. The Walls Will Fall exemplifies these traits during its five rage inducing anthems and leaves the listener wanting more, precisely what a short player is supposed to do. Predictable, yes, but pummeling and enjoyable too.

Why review the same bands over and over?

I love Terror but even I can admit that this release was pointless. "Hey we're Terror, still a band, buy a new windbreaker. See you in 2 years"

Why review the same bands over and over?<===== that is what "Hardcore" is,the same garbage-different name/packaging.

Nobody cares about your shitty tape collection

Thanks for the history lesson on how you totally met vogel once and he had like other bands and stuff and totally belief systems yo. f*ckin retard

Butthurt little f*cks here on this board

this review could have literally just said "Terror gonna Terror. The end."

Damn, what an awesome album!

Hate on Terror all you want, but respect is due when it's due. And Vogel has earned it. When he moved to (and I lived) in Syracuse, he would be at almost every show possible. And wouldn't be pulling the 'in popular and better than you' card.

Terror - Live By The Code Terror - The Damned, The Shamed Terror - Always The Hard Way Terror - One With The Underdogs Terror - Lowest Of The Low