Turnstile Move Thru Me 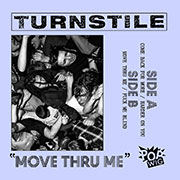 1. Come Back For More 2. Harder On You 3. Move Thru Me 4. Fuck Me Blind
2016 Pop Wig Records
Our score 8
by Luke Henderson
9/16/2016
To say that Turnstile's last album, Nonstop Feeling, was divisive amongst fans and critics alike would be an understatement. Many didn't think it deserved the praise it received, and openly rejected the funk, psychedelic, and rap rock influences that served as the basis for much of the album. Meanwhile, proponents of the band praised it as a forward-thinking and adventurous endeavour. Whichever view was taken, Nonstop Feeling did help bring Turnstile a new level of exposure, as it quickly became one of the most talked-about records of last year. Instead of delving further into the realm of experimentation, the group's latest release largely focuses on a more hard-hitting and direct style of song-writing. The EP begins with "Come Back For More," which opens with a layered, plodding intro before abruptly switching course, becoming a frantic, upbeat track that is more of a straightforward hardcore song than almost anything on Nonstop Feeling. Despite the forthright nature of this offering, there are small melodic flourishes and haunting background vocals that make this, unmistakably, a Turnstile song. Having such a lively start also helps to set the tone for the rest of this EP. Those who were expecting an increasingly avante-garde record (which, given the band's trajectory so far, wouldn't be an unreasonable assumption) will be largely disappointed with most of this 7-inch. Instead of expanding on slower, more complex aspects of the group's catalog, this record seems to be driven by an attempt to refocus the band. The second track, "Harder On You," is even more stripped-down than the previous song, although it trades rapid tempos for slower, trudging and churning riffs. Nevertheless, together with "Come Back For More," the first half of this release is unabashedly hardcore in its style and performance. This musical frankness can also be heard on the title track, which does incorporate more groove than the earlier tracks, but still favours an aggressive and blunt delivery. The only real foray into the experimental realm comes via a cover of "Fuck Me Blind," a track by Washington D.C. band Give. True to the original, the integration of a sparse verse riff and elegant female vocals to fill out the bridge balances the otherwise belligerent and profanity-laden choruses. Rare amongst covers, this is an improvement upon Give's version (the female vocals are even in tune). Bottom Line: Turnstile returns to its hardcore roots for this blistering EP. The song-writing is impressively focused and as forceful and antagonistic as anything that the band has done up until this point.

I remember when these guys would have been the Cro-Mags of their time. They are headed in a different direction now. It's more like what Limp Bizkit did a while back. Having that hip hop mentality with heavy music seems to work. Another band doing a similar style is Atilla. I think it's cool that these guys and Orange Code are on a cool label like Roadrunner now. I wonder if they will tour together?

" It's more like what Limp Bizkit did a while back. Having that hip hop mentality with heavy music seems to work. " This guy is in his 40s trust me

>This guy is in his 40s trust me Knowing the history of music is important. He could have also gone with Biohazard, Bodycount or even Rage Against the Machine. The point he was trying to make still stands. Sorry that we're not all 15 year olds, who only know the current trends without knowing where they started. SMH.

gay as f*ck. SIDE A/SIDE B? go f*ck yourselves

"forward-thinking"... by literally copying things from the past.

gazing at Faith No More and Alice In Chains through the lense of a hardcore bro isn't forward thinking or, ugh..."progressive."

They f*ckin suck. Just another trendy bad. They will break up after this and all go to make more trendy bands. Copy off the past to try and be cool. Underground is dead

You guys are a bunch of gays,turnstile is f*cking awesome ,you don't know shit about HARDCORE!!!!

Squirt shit between your teeth like the playdough fun factory

ALL YOU GUYS THAT DONT LIKE TURNSTILE MUST BE FANS OF GAYCORE ,big limp wrist fans and homo superior .ya pleasures