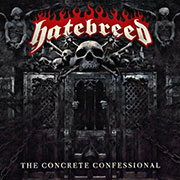 01. A.D. 02. Looking Down the Barrel of Today 03. Seven Enemies 04. In the Walls 05. From Grace We've Fallen 06. Us Against Us 07. Something's Off 08. Remember When 09. Slaughtered in Their Dreams 10. The Apex Within 11. Walking the Knife 12. Dissonance 13. Serve Your Masters
2016 Nuclear Blast Records
Our score 5
by Luke Henderson
5/26/2016
As a long-time fan of Hatebreed, who largely was introduced to metallic hardcore through Under the Knife and Satisfaction is the Death of Desire, I've always given them a little more leeway than other bands of their ilk. I respected that they had found their niche and knew how to play to their audience. I've also never had a problem with their reliance upon an established formula or their gradual embrace of an increasingly metal-influenced sound. Finally, I have always been generally impressed with the band's output, up to and including 2013's The Divinity of Purpose. All of this is to say, when I dislike an element of a Hatebreed record, it doesn't stem from the same place that much of the criticism of the latter half of their career thus far has focused on. Hatebreed's most recent offering, The Concrete Confessional, starts strong with "A.D.," which blends galloping drums, blistering fast riffs, and Jasta's signature venom-filled vocals. Even the following song and lead single, "Looking Down the Barrel of Today," is rather memorable. It expertly blends Slayer-inspired riffs with guttural screams, although it is book-ended with repetitive spoken-lines that draw away from the overall intensity of the track. Following this competent start, the record makes one of its biggest missteps with "Seven Enemies." The only way to describe this track is as poorly executed nu-metal. A distinct Slipknot influence is present throughout much of this record, including this song's bland and juvenile threats ("…Today I wish a mother fucker would try/to see this fucked up world through my eyes") that are littered throughout, as well as the songs tired palm-muted breakdown. Likewise, "Something's Off" begins with a staccato, bouncing riff that seems out of place on this album and then doubles-down on its questionable direction by injecting a forcefully-spoken vocal style that was prominent in Family Values Tour-era nu-metal, one that had been largely abandoned outside of the weaker corners of the struggling genre. Other songs do not have such prominent issues, but still seem to fall short for various issues. "The Apex Within" and "Walking the Knife" are neither memorable nor particularly well-orchestrated and quickly become tiresome upon repeated listens. Another problematic facet of this album is the lyrics. No one is going to argue that Jamey Jasta has ever been a poet laureate, but his lyrics on this album are some of the worst he's ever written. Seemingly inspired by a thirteen year-old Juggalo's diary, lines like "when you're in league with vermin and bums, it's no surprise all you get is crumbs," "Sickness has come!," and "There's a beast in every man who breathes" are poorly written even by the most generous standards. These lyrical miscues are such an issue that they seriously detract from the songs in which they're found, quickly halting any immersive experience that could otherwise be had. Despite its glaring issues, this album is not a complete lost cause. Tracks like "In the Walls" and "Us against Us" deliver bludgeoning metallic riffs that help reinvigorate the album's overall tempo, while "Remember When" and "Slaughtered in Their Dreams" are well-crafted blends of the best aspects of the band's metal and hardcore influences. Unfortunately, these highlights are scattered amidst an abundance of less-than-impressive offerings. Bottom Line: The Concrete Confessional is a rare misstep in Hatebreed's longstanding career as leaders and trendsetters within metallic hardcore. The album's nu-metal influences and juvenile lyrics tend to overshadow many of its promising tracks.

Nah Hatebreed are great, you are very wrong.

Proofreading saves lives. Do it. Save a life.

juvenile lyrics? what do you expect, them to go full blown Crass on us? maybe cover a Cure song? f*ck you and your shitty opinion.

Isn't hardcore pretty juvenile if you really take a look at it...? This review is shite

for a better review, look up mine on the board.

I used to listen to Satisfaction is Death of Desire like every single day, all day, till I got laid. Spanks for the memories.

as a hatebreed fan i hate to say it, but i agree with this review. the new album is their worst yet.

hardcore, be it the "this is all I have! i will stand my ground!" mantra or the "fvck you, fight me" attitude, is pretty juvenile in general. This album is really good as far as the riffs and the production, but yea unfortunately the lyrics do kind of tread toward the "Mom, get outta my room" bands of the nu metal persuasion.

Jasta had to be pushing 40. Isn't that a little old to be a "I wish a motherf*cker would" guy? Lol

Jasta had to be pushing 40. Isn't that a little old to be a "I wish a motherf*cker would" guy? Lol No, not when Slipknot fans are your main audience

I hope Celine gets murdered

This album rules. Quality consistency and worth every penny. Sure it's not reinventing the wheel but it's hatebreed and so much more satisfying than deafheaven. go outside and jog. 8/10

For a band that acts so hard, it's nice to see that they constantly give each other butterfly kisses.