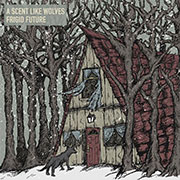 01. Into the Grey 02. Caught In 03. American Winter 04. Medicate the Past 05. Haunted 06. Hands of Porcelain 07. Sycophant 08. Okami 09. Empty World 10. Ghost of the Grave 11. Just a Shade of Blue
2016 We Are Triumphant Records
Our score 5
by Colin
3/28/2016
A Scent Like Wolves are a metalcore band based out of Reading, Pennsylvania. Frigid Future is the group's second album. Frigid Future kicks off with a rather by-the-book metalcore track called "Into The Grey." A heavy staccato palm-muted riff with an underlying melodic guitar lead gives way to the upbeat hook before transitioning back. What this track lacks in originality, though, it makes up for in skill. The guitar playing is impressive and the percussion in on point, providing enough drive in the heavier moments and leaving enough space for the melodic parts. This could pretty much be said of the entire record. Before the end of the third track, however, 'Wolves have thrown all the metalcore clichés at the listener. "Caught In" is overloaded with bouncy djent riffs, breakdowns and glitchy production, while "American Winter" hits you with its spoken word verses delivered over programmed drum beats. It's all a bit too predictable. Where A Scent Like Wolves really excel is their ability to move between the heavier and more melodic moments. Employing a dual vocal attack of screamed and sung vocals, the band is able to seamlessly shift gears while maintaining the flow of the song. The clean vocals sound overly processed and they seem like they'd be more appropriate in a pop or dance song. That may be what ‘Wolves are going for, and if that is the case, they've certainly achieved it, but they often come off as gimmicky. On the other hand, mellower tracks like "Haunted" and "Empty World," which rely heavily on the sung vocals, feature well-written, insanely catchy hooks that I'm sure will grab the attention of the current Warped Tour crowd. Heavier tracks like "Sycophant" and "Medicate The Past" offer more in terms of skillful riffing, but still seem all too familiar. The basic formula is competently executed, granted with a bit more feel than most bands in this genre, but it's still more of the same old. Frigid Future just feels a bit too stagnant. And while the song writing leaves something to be desired, the production doesn't help much either. Overall, the album is very polished sounding. The drums, like the vocals, are also overly processed and triggered, giving them the mechanical sound that so many bands suffer from these days. Yes, everything is super clean, but it's to the detriment of the band, who aren't really able to break out of their confines. Bottom Line: All of this may sound a bit harsh, but the reality is that A Scent Like Wolves have their place in this scene. Frigid Future is rather formulaic and predictable, but in a genre that is by nature all of these things, this record offers enough by way of catchy hooks alone to demand an audience.
Comments (6) post new comment
anonymous 3/29/2016 1:57:20 AM

Yo not that I care about this band but the album name changes between the start and the end of the review. Is there a sub-editor in the house?

Why don't we just give shit reviews to like black veil brides instead of normal dudes having fun?