World Be Free The Anti-Circle 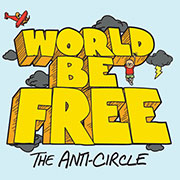 01. World Be Free 02. Shake The Ghost 03. All These Colors 04. Empty Things 05. Never Slip 06. Breakout or Busted 07. The Anti-Circle 08. I'm Done 09. What I See 10. Sammy's Mirror 11. I Erase You 12. Of My World 13. Promises Made 14. Counting Vices
2016 Revelation Records
Our score 8
by Luke Henderson
3/15/2016
Not naming any names, but supposed hardcore and punk 'supergroups' tend to underwhelm. On paper, combining veteran musicians, each with decades of experience under their belts, seems like a recipe for unquestionable success. In reality, the result often comes out sounding like a confused mix of genres, cobbled together by a bunch of musicians that are well past their best-by date. A group like World Be Free definitely seemed at risk for being categorized in this same fashion. Featuring members of Terror, Strife, and Judge, amongst other legendary bands, this new 'supergroup' was fortunately able to use their experience to their advantage, while still being able to produce new and exciting music. Granted, nothing on The Anti-Circle would be considered a wild departure for any of the members involved, but their decision to keep this band firmly rooted in hardcore doesn't mean that they were forced to rely on stale riffs or predictable song writing. The self-titled, opening track immediately demonstrates that this band is aiming to deliver a more stripped down sound than recent Strife and Terror records, while varying their stylistic lineages. Drawing on influences from late 80s/early 90s melodic hardcore, "Shake the Ghost" and "All These Colors" showcase the type of stripped down vocals, galloping drums, and sing-along choruses that make this band so much fun to listen to. This group's members largely come from more serious and straightforwardly aggressive bands, but on songs like "Empty Things," World Be Free takes a more animated and experimental direction. There is a youthful energy that permeates these first few tracks that strikes a chord, while providing a framework for the rest of the record. In juxtaposition, "Never Slip" and "Breakout or Busted" are more of what might've been expected from this band after reading their resumes. Faster and more aggressive than the other tracks on the first half of the album, these two songs impressively deliver blistering fast guitar lines under lyrical calls to action, giving the album a well-placed, energetic boost. Beginning the second half of The Anti-Circle, the album's title track is supported by a driving rhythm and a melodic outro that demands to be repeated as soon as it ends. Following this, "I'm Done," "What I See," and "Sammy's Mirror" oscillate between hard-hitting verses, dynamic interludes, and angular guitar riffs. It's on tracks like these that the band's collective experience really shines through. Blending stylistic elements like World Be Free does on this release may seem deceptively simple, but it can easily go off-the-rails rather quickly. Fortunately, the collective experience that this group brings to the table helps ensure the song itself, rather than the desires of each individual song writer, is always the focus. The album doesn't relent in its later songs either. "I Erase You" is one of the album's shortest and most memorable tracks, while "Of My World" seems much longer and intricate than it actually is because of the rapid-fire pace changes peppered throughout the song. "Promises Made" and "Counting Vices" finish things off on a high note, with each track relying on powerful guitar riffs to carry Vogel's declarations and laments. Bottom Line: This is a well-crafted and incredibly enjoyable album, tailor-made for anyone who enjoys the glory days of hardcore, but also yearns for something new and exciting. While World Be Free will undoubtedly be an intermittent project for many of its members, this hopefully won't be the only offering we see from this band.

Can you guys please rate something below a f*cking 7 for once? f*cking shill ass reviewers.

Music is great ! singing is so-so best song is world be free , I expected better

Thank you for making a real hardcore record. Anyone that says something else is dumb as f*ck

Fiore gives some of the best head in town.

Vogel is my boy. Lets me smoke weed out of his neck hole.