Ignite A War Against You 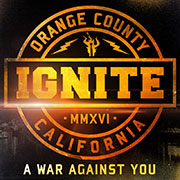 01. Begin Again 02. Nothing Can Stop Me 03. This Is A War 04. Oh No Not Again 05. Alive 06. You Saved Me 07. Rise Up 08. Where I'm From 09. The Suffering 10. How Is This Progress? 11. You Lie 12. Descend 13. Work
2016 Century Media Records
Our score 7
by Luke Henderson
2/3/2016
After almost a decade between offerings, it wasn't clear whether Ignite's new album, A War Against You, was ever even going to happen. In fact, prior to their resumed touring schedule in 2014, the future of the band itself was in question after singer Zoli Teglas replaced Jim Lindberg as the lead singer of Pennywise in 2009. What was never in doubt was that if the band did get around to recording the follow-up to the acclaimed 2006 album Our Darkest Days was that it would be chock full of the same hook-laden, melody-driven, politically-outspoken brand of punk that Ignite has always been known for. In that respect, A War Against You neither surprises nor disappoints. From the opening notes of "Begin Again" it is evident that Ignite continues to rely on Zoli's impressive vocals and catchy punk riffs in a way that makes it difficult to believe that it has been almost ten years since their last record. That's not to say that the band hasn't added new elements, but it is unmistakably an Ignite album in every way imaginable. This opening track also leaves no question about Zoli's ability as a vocalist, as his operatic style is on display throughout. Unfortunately, this song, along with the fourth track "Oh No Not Again," oddly load the first half of the album with some of the weaker and least interesting tracks. These songs are predictably structured, formulaically anthemic, and full of some of the blandest riffs on the record. Fortunately, the other early songs like "This Is A War" and "Nothing Can Stop Me" are driving, well-crafted, energetic calls-to-action that demonstrate the best aspects of Ignite and inspire hope for the remainder of the album. After its early miscues the album really begins to find its footing. "Alive" blends upbeat tempos and a positive message while "You Saved Me"'s crunching riffs inject new life into the album and demonstrates that while the members of Ignite may be older, they haven't lost a step when it comes to writing this type of hook-filled melodic punk. Similarly, "Where I'm From" and "The Suffering" keep the album driving forward with familiar but fresh-sounding riffs and galloping drums inside of relentlessly well-crafted songs. Continuing on with the upswing in quality, the album closes with a flurry of memorable and gratifying tracks. "How Is This Progress?" grapples with environmental and political calamities overtop of energetic riffs and "You Lie" delivers the most straightforward melodic hardcore offering of the record. To close out, "Descend" blends aggression and melody underneath frantic verses and anthemic choruses, while "Work" closes with a slower, stripped-down track that showcases Zoli's remarkable vocal abilities. Bottom Line: Long-time fans of Ignite will be pleased with this catchy and well-written offering. Despite a few early missteps, the record quickly recovers and never again relents. It is simultaneously a beautiful sounding and urgent feeling album that will be appreciated by those who crave both melody and meaning in their punk records.

Was looking forward to this for years and am very underwhelmed by the final result. This album is very forgettable which is odd for Ignite. There are some good moments too but it just feels too flat overall and lacks the emotion and agression of their previous releases. The opening sounds like some sort of Poison or Bon Jovi vocal harmony. A few of the songs later on the album are pretty decent but the album as a whole is a bit dull to listen all the way through.

says the dumbass that got fired.

What a dumb "safe" review. Whoever wrote this sucks and has zero balls. More celine reviews. He actually listens to what he reviews and won't give everything a safe 7 like a pssy!

this record is killer you are all herb jagaloons

Ignite is the new sum 41