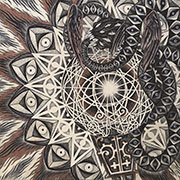 1. Path of Broken Glass 2. The Cold Lines 3. Of The Outer Darkness 4. Will, Wish & Desire 5. Godhead 6. Forever Kingdom of Dirt 7. Lost Communion 8. Nuummite
2015 Candlelight Records
Our score 7
by Daniel Marsicano
11/4/2015
Abigail Williams has been a constant topic for arguments and debates in the wasteland that is Internet blogs, reviled by those who see them as posers or black metal for the Hot Topic crowd. No matter what they do -- the symphonic elegance of In The Shadow of a Thousand Suns or the raw mannerisms of In the Absence of Light -- criticism has dragged alongside them. It hasn't seemed to bother founding member Ken Sorceron, who has stuck with the band through multiple hiatuses and inconsistent lineups. With The Accuser, the group's fourth album, there's been yet another stylistic turn away from an established sound. While their previous album, Becoming, was enveloped in a foreboding atmosphere that took significant time to build up effectively, the theme of this record is endless pessimism. Sorceron revamped the lineup again, bringing in former Lord Mantis vocalist/bassist Charlie Fell as a drummer and Wolvhammer/Chrome Waves guitarist Jeff Wilson to help out with the guitar work. Add in Will Lindsay, who recorded the bass for The Accuser, and the whole record nails that claustrophobic, grimy feel Lord Mantis and Wolvhammer deliver so well. Any kind of subtle, melodic touches from Becoming have been eradicated, replaced by rumbling feedback. Some of these songs transition between each other with the power of the feedback, giving parts of The Accuser a cohesive feel that makes it difficult to stop listening to after one song. That static dissonance also benefits the musical expansions and pointed shifts in attitude that spring forth, as happens with "Of The Outer Darkness." Great pacing decisions are made as far as the ordering of the tracks goes. For every song that devours the light, there's another that lets it edge its way back in. A tune as sonically devastating as "Path of Broken Glass" can only be valued if it isn't repeated a whole bunch of times. Having a mid-tempo song like "The Cold Lines" follow provides the opener with the ruthless result it strives for. The variety in which The Accuser flows is readily displayed in the album's second half. A stretch of the album contains a few lengthier cuts that toy around with noisy guitar solos and dreary bass lines. "Forever Kingdom of Dirt" combines those two into a draining experience that makes full use of its seven minutes. The most intriguing creative choice is low-key closer "Nuummite," which sounds like something Nick Cave and Mark Lanegan wrote together on acid while driving through a desert in the Southwestern United States. Usually, when a band says that their new release is going to be something different or a marked evolution over previous outputs, it's nothing more than a slight deviation. The remarks are a PR trick that we've failed to buy into, to the point that anytime a band declares an album being "their most brutal" or "out of left field," it's met with eye rolling and snarky replies. But that has never been the method of publicity for Abigail Williams. What the band has always had is sonic unpredictability. Their identity is still up in the air, a bothersome puzzle that doesn't show any signs of being solved this decade. Maybe The Accuser is it for them; the destination the group has been pushing to find. Maybe this is just another detour, a "gotcha!" moment that will seem less humorous the fifth time around. Either way, what Abigail Williams has with The Accuser is a viable point from which to expand if they so choose. Bottom Line: With the callous, sonically punishing The Accuser, Abigail Williams have once again eschewed putting out the same record twice.

BMTH will be pissed at this artwork

sorry but that art is genuinely a bmth ripoff, not even joking, it's exactly the f*cking same

You're a f*cking idiot if you think this album art is the same as BMTH's. Like, maybe even extra-chromosome-level idiot.

You guys are f*cking retarded if you think these two covers look the same. https://en.m.wikipedia.org /wiki/File:BMTH_Sempiterna l.png

Listened on youtube. Got through a minute. Continued watching takedownman vids.

Also, a dude talking about shit on the internet is more exciting than this garbage.

Three questions: A. Does that smoke keyboardist still play with them? 2. Does she have leaked nudes yet? D. If so, link please.

Artwork looks like BMTH and the new Reflections. Ripoff Posers